MCCOTTER: The Death of Nicaraguan Democracy– U.S. Economic and Security Interests Are Not Always Simpatico 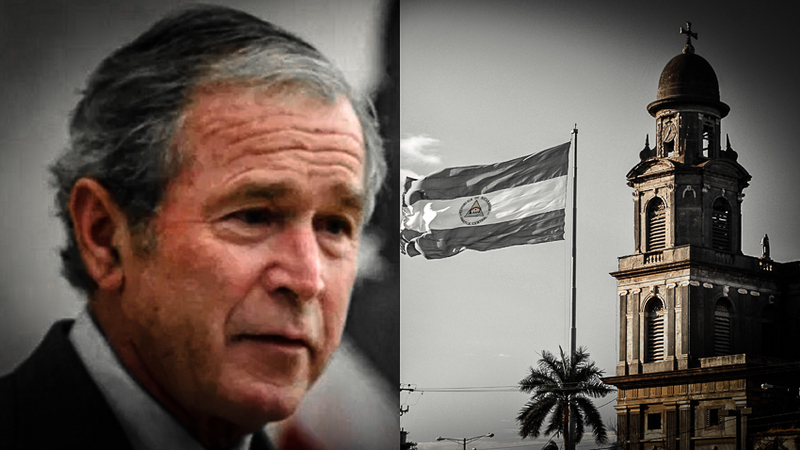 bush
In the summer of 2005, as the U.S. Representative for Michigan’s 11th Congressional District, I opposed the Central American Free Trade Agreement (CAFTA) with the Dominican Republic, Guatemala, El Salvador, Honduras, Costa Rica and Nicaragua. My position was based on the harm it would do to Michigan and America’s sugar beet growers; and because of its detrimental impact on American relations in the region. This did not sit well with the Bush administration and House leadership.

In a meeting with the then-House GOP majority’s leadership, I again heard two key rationales for supporting the pact. One, CAFTA would be a “win” for the U.S. economy, because it would break down the other nations’ protectionist trade barriers; thus, our economy would gain more than our prospective trade partners. The other rationale was to show the American government’s support for the democratically elected leaders in those nations. I expressed my disagreement and remained opposed to the legislation.

This earned me, along with a handful of other members opposing CAFTA, a summons to the White House to meet with President George W. Bush and his team. When the same rationales for supporting CAFTA were posited, I reiterated my opposition on the grounds it would harm sugar beet growers. But, given the history of many in that room, I emphasized my opposition on national security grounds. The logic was inescapable: if, indeed, CAFTA would be a win for the overall American economy by removing the other nations’ protectionist trade policies, the other nations’ citizens will feel cheated, especially the beneficiaries of the repealed protectionist trade policies; and the ensuing political unrest, which would brand those nations’ friendly administrations as U.S. lackeys, would constitute an existential threat to the continuation of democracy building in the region. Specifically, I noted that CAFTA would return Daniel Ortega and the Sandinistas to power in Nicaragua. My concerns were dismissed. Ultimately, CAFTA passed.

Today, after being swept out of office in national elections in 1990, when Violeta Barrios de Chamorro won the presidency and the opposition won the National Assembly, Daniel Ortega is again the president of Nicaragua. Rosario Murillo, his wife, is vice president of Nicaragua. Their Frente Sandinista de Liberación Nacional (FSLN) party – i.e., the Sandinistas – are back in despotic control of the country. Catholic Bishop Rolando Álvarez of Matagalpa is on trial for the “crime” of supporting democracy and opposing the government aligned paramilitary’s murders. And, once more, Nicaraguans are being oppressed and killed by the hard-left Sandinista regime.

Of course, not all of this can be singularly blamed upon CAFTA. But it did serve as one more weighty economic straw upon the already straining camel’s back that was Nicaraguan democracy. By 2018, public opposition to pension legislation triggered the exponential increase in the latest round of Sandinista tyranny, which included killings by the police and pro-government paramilitary groups, arbitrary detentions, attacks on journalists and members of the Catholic Church. According to the BTI, a collaboration of analysts from universities and think tanks to assess “the transformation processes towards democracy and inclusive market economy worldwide”:

In April 2018, the country entered in its first major crisis since the civil war in the 1980s, when demonstrations against the reform of the national social security system expanded into more general protest against the Ortega government with the ultimate demand of early elections. Since then, all the political protesters have been persecuted and all kind of contention repressed. Ortega’s regime turned to a violent authoritarian regime that has maintained permanent pressure on the opposition.
At the time, Amnesty International denounced the Ortega dictatorship’s “deplorable” repression:
“Heavily armed pro-government groups remain at large, accompanied by police forces, committing joint attacks against the civilian population,” said Erika Guevara-Rosas, Americas director at Amnesty International.

“The message sent by the highest-ranking Nicaraguan authorities is that they are willing to do anything to silence the voices of those who demonstrate against this violent repression. This situation is extremely serious and deserves strong condemnation from the international community.”

“The direct attack on figures who publicly denounce the attacks of agents of the government of President Ortega is without a doubt a form of retaliation and an attempt to silence those dissident voices,” said Erika Guevara-Rosas.
“The serious human rights violations committed or permitted by the authorities are turning the country into a pressure cooker about to explode. Nicaragua’s tragic history must not be repeated.”
But the Ortega regime proved unmoved by international protests. Viewing these public protests – i.e., democracy – as an existential threat to its rule, the dictatorship’s persecutions escalated. Believing the Catholic Church to be a prime instigator of public disgruntlement with the Sandinistas, on August 19, 2022, police arrested Bishop Álvarez, an opponent of the Ortega regime, and placed him under house arrest. The imprisonment of the dissident bishop has led to international calls to free him and further condemnations of the Nicaraguan autocracy. It also led to consequences from the American government.
The United States Commission on International Religious Freedom’s (USCIRF) Commissioner Frank Wolf said: “Bishop Álvarez is allegedly charged with conspiracy, spreading false news, and damaging the Nicaraguan government and society. In reality, he’s motivated by faith to call out the [Ortega government’s] human rights record, making him its latest target.”
Commissioner Wolf’s outrage was evidenced in the USCIRF’s 2022 annual report and recommendations regarding the Sandinista regime:
In the first half of 2022, the Nicaraguan government has continued its pattern of harassment against the Catholic Church. Catholic clergy have come under direct persecution… USCIRF recommended that the State Department maintain Nicaragua on its Special Watch List in the designations expected later this year.

In addition to the sanctions focused on human rights and democracy, the Biden administration should also consider imposing targeted sanctions on Nicaraguan government agencies and officials responsible for violence and other punitive actions against houses of worship, religious leaders, and organizations, especially if more priests are detained on specious charges.
The State Department acted upon the USCIRF recommendations. By year’s end, On November 15, 2022, the State Department again “placed Nicaragua on its Special Watch List for severe violations of religious freedom.” Moreover, U.S. sanctions were imposed, specifically:
Visa restrictions on over 500 Nicaraguan individuals and their family members. No member of the Nicaraguan government nor anyone who facilitates the Ortega-Murillo regime’s abuses should believe they can travel freely to the United States.
The United States, together with our allies and partners, believes that a return to democracy and respect for human rights and fundamental freedoms in Nicaragua is essential. We will use diplomatic and economic tools available to promote accountability for the Ortega-Murillo regime, reiterate our call for the immediate and unconditional release of political prisoners, and urge the restoration of civic space for the people of Nicaragua.
Evidently, the Ortega regime had no immediate plans for an American vacation. In January 2023, the regime announced it is further persecuting Bishop Alvarez by putting him on trial. Per the Catholic News Agency:
According to a statement from the [Ortega regime’s] judiciary, “in the Managua Criminal District Courts, the initial hearing of the criminal proceeding was held, in which Rolando José Álvarez Lagos appeared as accused of the crimes of conspiracy to undermine national security and sovereignty and the propagation of fake news through information and communication technologies to the detriment of the Nicaraguan State and society.

The judicial authority reviewed the precautionary measures ordered in the preliminary hearing, maintaining house arrest, likewise, admitted the exchange of evidentiary information and referred the case to trial,” the bulletin stated.
There is no word yet on whether the Ortega regime will try to conjure up from the lower depths of Hell the ghost of Andrey Vyshinsky to serve as Bishop Alvarez’s prosecutor. Likely, the dictatorship won’t feel the need, based upon the judicial persecution of Father Oscar Benavidez Dávila, who was condemned by a Sandinista kangaroo court to eight years in prison for the same bogus charges of “conspiracy to undermine national security and sovereignty” and “spreading fake news.”
On his part, the dissident Bishop has placed his defense in the hands of the highest power: “Aware that prayer is the Christian's strength, the invitation is to continue to implore Christ to intercede and watch over this small flock of His.” We should honor his request, and say a prayer for Bishop Alvarez and the Nicaraguan people. For as his fate goes, so goes the fate of the Nicaraguan people and their aspirations for a new birth of freedom.
While we are at it, we should also pray for His divine intercession that, for a change, American policy makers admit and learn from their past mistakes. While I disagreed on both scores, enough U.S. policymakers believed CAFTA would be an economic boon for country; and it was presumed the deal was also intrinsically in our national security interests, because it would somehow promote more prosperity and democracy among our trading partners. It was the “end of history” ideology writ large.

“Democratic capitalism had triumphed!” For CAFTA and other trade agreements, policymakers’ did not ask the question “what could go wrong?” They asked, “how soon until everything goes right?” Nevertheless, there is a kernel of wisdom in the “end of history” ideology: policymakers’ hubris, cupidity, and historical ignorance may not bring about the end of history; but it can bring about the death of a democracy.
Again, CAFTA’s passage was not the sole reason for the abhorrent demise of Nicaraguan democracy at the hands of Ortega, Murillo, and their dictatorial Sandinista regime. But CAFTA certainly was a factor in exacerbating the economic conditions that served as political kindling for the pension protests. And, it is why the death of democracy in Nicaragua serves as an object lesson that America’s economic interests and national security interests are not always simpatico.
A Human Events contributor, the Hon. Thaddeus G. McCotter (M.C., Ret.) represented Michigan’s 11th Congressional district from 2003-2012, and served as Chair of the Republican House Policy Committee. Not a lobbyist, he is a frequent public speaker and moderator for public policy seminars; and a Monday co-host of the "John Batchelor Radio Show," among sundry media appearances.
bush