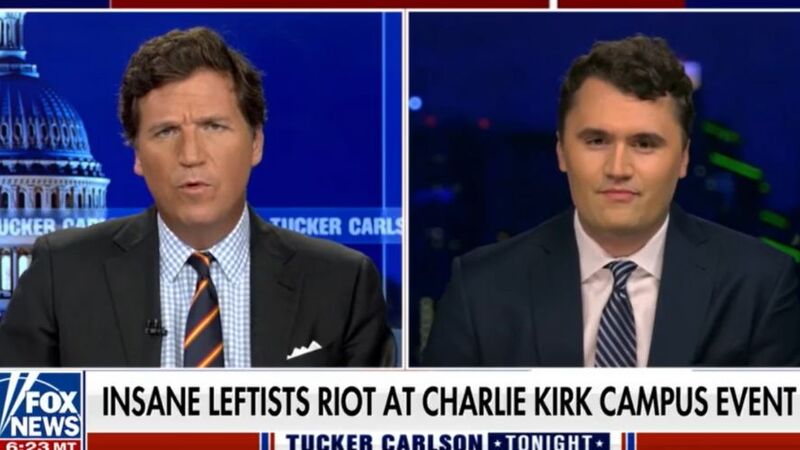 tucker charlie
Turning Point USA founder Charlie Kirk told Tucker Carlson on Fox News Thursday night after masked protestors attempted to disrupt his speech at the University of New Mexico that the radical left does not “believe that speech is a value; all they care about is force and power.”

Kirk said, “It's really interesting when you try to show up on a college campus and do an optional voluntary event, how angry the other side gets.”

Masked far-left protesters showed up to the event marching with signs and chanting expletives at the conservative activist. According to KOB Channel 4, campus police “enlisted the help of New Mexico State Police in riot gear to detain three people, including one UNM student.”

“All were issued a criminal summons for interfering with officials or the general public. That is a petty misdemeanor that could mean a $500 fine and/or less than 6 months in jail,” the outlet reported.

Kirk continued, “But this is a very important moment for people to recognize and understand that the other side, the left, the radical left, they're acting like the very same domestic violent extremists that the entire federal government is now organized to go after.”

“And we're told, that's on the American right? Really go look at that footage,” Kirk challenged. “Is that the Proud Boys? Is that the American? Right? Are those conservatives? No. Those people are on the left and I wonder who's financing them and who's behind it.”

Kirk told Carlson that his appearance at the University of New Mexico had already been postponed due to concerns and protests over his visit. Fortunately, Wednesday’s speech went smoothly despite the unrest outside.

Chants of "F*ck Charlie Kirk!" could be heard from the leftist mob. They also appeared to yell "F*ck Erica" which The Post Millennial confirmed is a reference to TPUSA chapter president Erica Rodriguez. However, it is also the name of Charlie Kirk's wife.

"Get the f*ck off our campus!" another shout could be heard amongst other expletives directed at Kirk.

Police formed a barrier between the protestors and the building in which Kirk's event was being held. The leftist activists stood outside the barrier, shouting into megaphones, banging on items, and waving signs that read "SHUT DOWN WHITE SUPREMACY."

Kirk explained to Carlson, “We are in the era of weaponized name calling where people ask for forgiveness immediately, and they apologize for no reason, just because they're called this.”

“But there's another reason,” Kirk added. “It's because the modern left, the postmodern left. They don't believe in speech. They don't believe you're an individual made in the image of God. They believe you are a member of a collective identity group, and they believe that they can then shut us up just by calling us white supremacists and racists.”

“I invited every single one of them to come into our event and they could have the microphone and make their case, but they do not believe that speech is a value,” Kirk continued. “All they care about is force and power. This is the country they're trying to lead us towards. What happened in Albuquerque yesterday is not an aberration. It is a coming attraction. It is something that is soon gonna happen all across the country if we don't get this right. We win when we show up.”

Kirk told Carlson, “This is the third time this semester that we've done an event on this campus. The other two had to be canceled or ended abruptly because of these people intervened. So I went there on a personal mission because the way, the only way we lose right now is if we don't show up.”

“So I went there last evening, is to send a message to every one of these people. To send a message, one that's watching that we're gonna stand for free speech and you are not gonna be able to disrupt our events or bully our students with force. And thankfully, the event went very well despite their best protest and their violence.”

Kirk concluded by saying, “And one last thing I'll say is, despite everything the media has said over the last couple weeks about Gen Z, the good thing is that over the last five years, young people have become 13 points less liberal according to the Morning Consult. I don't think that the behavior yesterday is popular, nor do I think it's emblematic of an entire generation.”