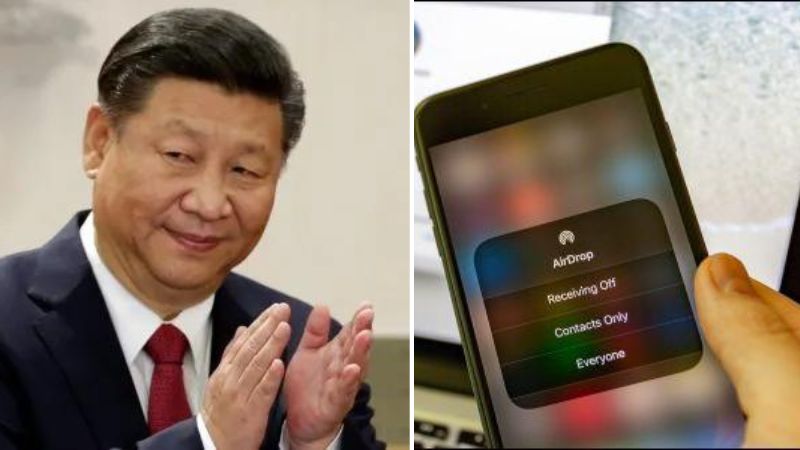 After Chinese protestors were using the airdrop function on iPhones to share material that was restricted under China's strict censorship, Apple limited its AirDrop feature following pressure from the CCP.

According to Hong Kong's South China Morning Post, "Apple has implemented a 10-minute time limit for Chinese users of AirDrop, its wireless file transfer function, in a move that could stymie the ability of iPhone users in the country to circumvent Beijing’s strict censorship controls."

China enforces strict measures to censor images and messages that are critical of its regime, which just saw Xi Jinping rise to a third term as leader of the country. While the internet, media outlets, and social media are easily censored, AirDrop's use of private servers made sharing material easier for those protesting. Especially because they could use either a Bluetooth or WiFi connection for person-to-person direct sharing. AirDrop also generates encrypted messages that are protected by firewalls, making it hard for observation from the government.

Vice recently reported on the phenomenon of AirDrop being used to share content of protest and described how it worked.

"A Shanghai resident was riding the metro on Tuesday when an AirDrop notification popped up on his iPhone: 'Xi Jinping’s iPhone’ would like to share a photo,'" Vice reported.

The phrasing was similar to banners hung up earlier in October.


Apple's new update to its iOS changes the function so that users can only accept materials from strangers in 10-minute windows. The change is also only implemented in phones purchased in mainland China.

According to the South China Morning Post, "It is uncertain why Apple made the AirDrop change, or whether it initiated the move or was asked to do so by authorities."

Apple has capitulated to requests from Chinese authorities in the past.

According to Breitbart, "Apple signed a secret $275 billion deal with the Chinese government in 2016 to avoid a regulatory crackdown."

The deal saw Apple agreeing with Chinese officials on a variety of technological fronts and that Apple would use more Chinese components in their manufacturing. After the move "Tens of thousands of apps" were removed from the App store on Chinese phones, such as VPN and encryption services.