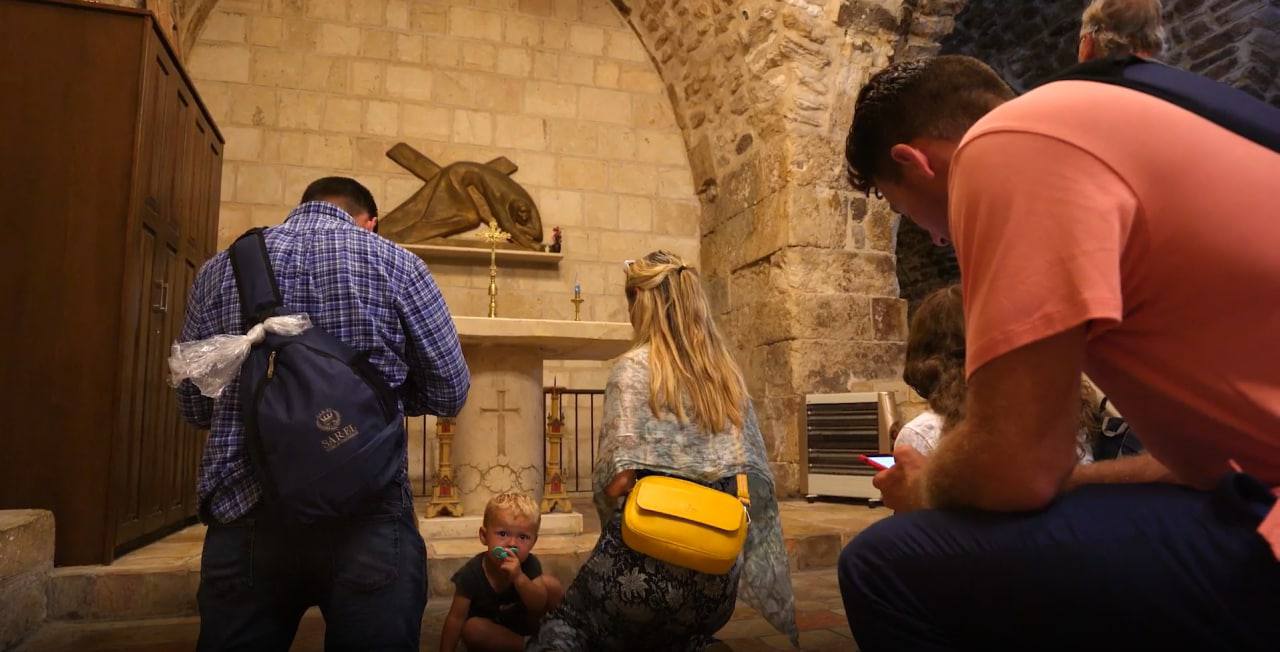 The two dicussed biblical events from the location where they all took place, including the potential real-life basis for the Old Testament tale of the destruction of the cites of Sodom and Gomorrah.

Posobiec and family toured Israel during September, with Turning Point USA, visiting the Dead Sea, Galilee, and the site where John the Baptist baptized Jesus Christ on the banks of the River Jordan, and then on to Jerusalem.

The trip was a journey to biblical sites, and the brothers discussed their reaction to those sites, such as Abraham's well, the Dead Sea, and other locations, as well as getting to see their parents take this trip and "walk those stones" that the ancients walked.

"This is also the location, that we're told in the Bible... is the location of Sodom and Gomorrah. This was the area where there is a huge pillar of salt... And they actually refer to it as Lot's wife," Jack told Kevin.

"And this is the crazy thing is that archaeological studies, one that just came out a couple of months ago, actually shows that scientifically they found that there was a city, there was a tell [township] pretty much in that exact location right off the Dead Sea that about 4,000 years ago, was destroyed by a meteor that flew in from the sky and then exploded over the city with the force of 1000 Hiroshima atomic bombs," he continued.

"This event did take place," he said. "They call it a cosmic airburst, that destroyed an entire city in the in the exact location that the Bible describes where Sodom and Gomorrah were."

That study, which came out in 2021, was undertaken as result of a "1.5-meter interval in the Middle Bronze Age II stratum that caught the interest of some researchers, for its 'highly unusual' materials," Science Daily reported.

"In addition to the debris one would expect from destruction via warfare and earthquakes, they found pottery shards with outer surfaces melted into glass, 'bubbled' mudbrick, and partially melted building material, all indications of an anomalously high-temperature event, much hotter than anything the technology of the time could produce."

It destroyed a city at the location of Tall el-Hammam. "The charred and melted materials at Tall el-Hammam looked familiar, and a group of researchers including impact scientist Allen West and Kennett joined Trinity Southwest University biblical scholar Philip J. Silvia's research effort to determine what happened at this city 3,650 years ago," Science Daily reported.

Of that city, Science Daily writes: "Located on high ground in the southern Jordan Valley, northeast of the Dead Sea, the settlement in its time had become the largest continuously occupied Bronze Age city in the southern Levant, having hosted early civilization for a few thousand years. At that time, it was 10 times larger than Jerusalem and 5 times larger than Jericho."

"There's evidence of a large cosmic airburst, close to this city called Tall el-Hammam," Kennett said, claiming as evidence the result would be an "explosion similar to the Tunguska Event, a roughly 12-megaton airburst that occurred in 1908, when a 56-60-meter meteor pierced the Earth's atmosphere over the Eastern Siberian Taiga."

"The shock of the explosion over Tall el-Hammam was enough to level the city," Science Daily reported, "flattening the palace and surrounding walls and mudbrick structures, according to the paper, and the distribution of bones indicated 'extreme disarticulation and skeletal fragmentation in nearby humans.'"

Posobiec notes that the the "cosmic airbust" wasn't linked by scientists to biblical accounts, as they so often are not, but that the evidence that cities were leveled, destroyed by forces beyon mankind's comprehension, indicates that the destruction of those cities may very well have occured in-line with ancient, Old Testament accounts.

The brothers dig into the Dead Sea scrolls, their legendary preservation in the dry desert air, and the the further preservation of ancient documents by the faithful throughout the ages.

The impact of the holy sites was very powerful not only for the brothers Posobiec, but for their family, including their father. They discuss a powerful moment where they, and their father, observed the Stations of the Cross so close to where Christ was actually crucified.

"The Bible is not just a book," Jack told Kevin. "And if you think it is, then you're missing half the story. In fact, you're missing the largest part of the story. And I would say this as a message to even folks out there who are agnostic, or even atheists and non-believer types, that, look, you know, not everybody's going to be like Kevin and I kneeling, and praying in Latin, inside the church, the Holy Sepulchre."

"But just understand that you can't really understand Western civilization, Western society, our history, our institutions, our way of life, unless you understand all of this, because this has been a massive part of the creation of Western society, in Western culture, whether you want to believe in the supernatural, metaphysical aspects of it or not, that you have to at least acknowledge that this is a major, major part of what got us to where we are now, what is directing us still, as we're going, there are traditions that are being passed on, certainly from from father to son," Jack said.

"And in this case, I was able to take my two children, to all of those sites along with us. In some cases, literally carrying them on my back if I had to, actually many cases, carry them on our backs. But the point being that that's something—"

"For the sake of the pilgrimage," Kevin jumped in.

The two agreed that this was a trip everyone should take.