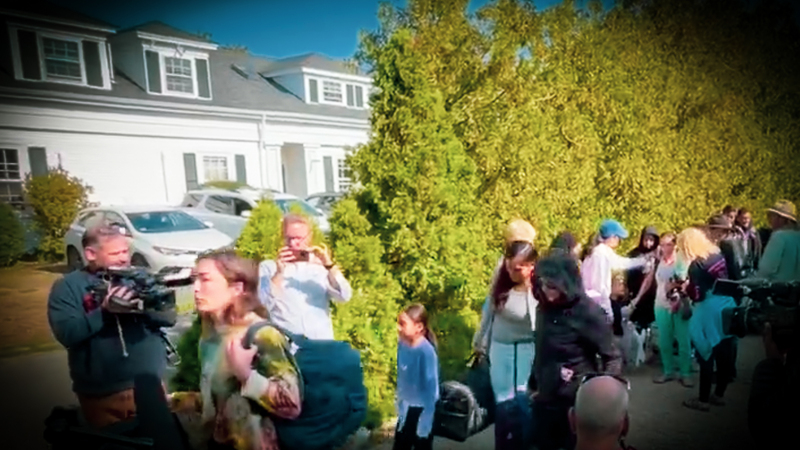 MVineyard
This article was originally published at The Post Millennial, a part of the Human Events Media Group.
*****


Governor Charlie Baker of Massachusetts on Friday announced plans to deploy at least 125 National Guard troops to relocate the illegal migrants that were flown into Martha's Vineyard by Florida's Governor DeSantis.

In his announcement, Gov. Baker said the state will transport the migrants to a military base on Cape Cod, with the help of the state's National Guard, just one day after their initial arrival to the island.

HAPPENING NOW: Migrants, flown into Martha’s Vineyard by Fl’s governor, are boarding buses. They’ll be heading to Joint Base Cape Cod, according to officials. 125 Mass National Guard members are being activated to assist. @NBCNews pic.twitter.com/RLwxNPu8GM

"Today, the Baker-Polito Administration announced new shelter and humanitarian supports at Joint Base Cape Cod (JBCC) for the approximately 50 migrants who arrived in Martha’s Vineyard this week," the press release began. "The Massachusetts Emergency Management Agency (MEMA) is coordinating efforts among state and local officials to ensure access to food, shelter and essential services for these men, women and children. Governor Charlie Baker also plans to activate up to 125 members of the Massachusetts National Guard as part of this relief effort."

Martha's Vineyard is a community where the vast majority voted for President Joe Biden in the 2020 election and where the average home price is $1.325 million.

Ian Miles Cheong tweeted a photograph of a sign displayed in the wealthy community, reading "We stand with immigrants," and "refugees," pointing out the juxtaposition of military personnel escorting the migrants off of the island.

This sign is in Martha's Vineyard. Note that they "Stand with immigrants, with refugees," etc.

What happened to their solidarity? pic.twitter.com/ZoaFGpCzUb

In an effort to curb the negative impact of waves of migrants pouring over the US-Mexico border and finding their way to his state, DeSantis took measures into his own hands by transporting 50 aliens to the affluent New England island, with residents that overwhelmingly support the Biden administration's liberal immigration policies.

According to Gov. DeSantis’ press team, the two planes of migrants were "part of the state’s relocation program to transport illegal immigrants to sanctuary destinations."

Posobiec suggested that Musk was beginning to do to the media what Trump had been doing for years, bu...

The body of a teen from Israel’s Druze Arab community that was stolen by Palestinian terrorists from ...

The LGBT community, and all minorities for that matter, need to stop embracing gun control. It is kil...

'The Chinese model is certainly a very attractive model for quite a number of countries.'...