EXCLUSIVE: Poll Shows Most Voters Would Support a Convention of States. A Look at the Effort To Make It Happen. 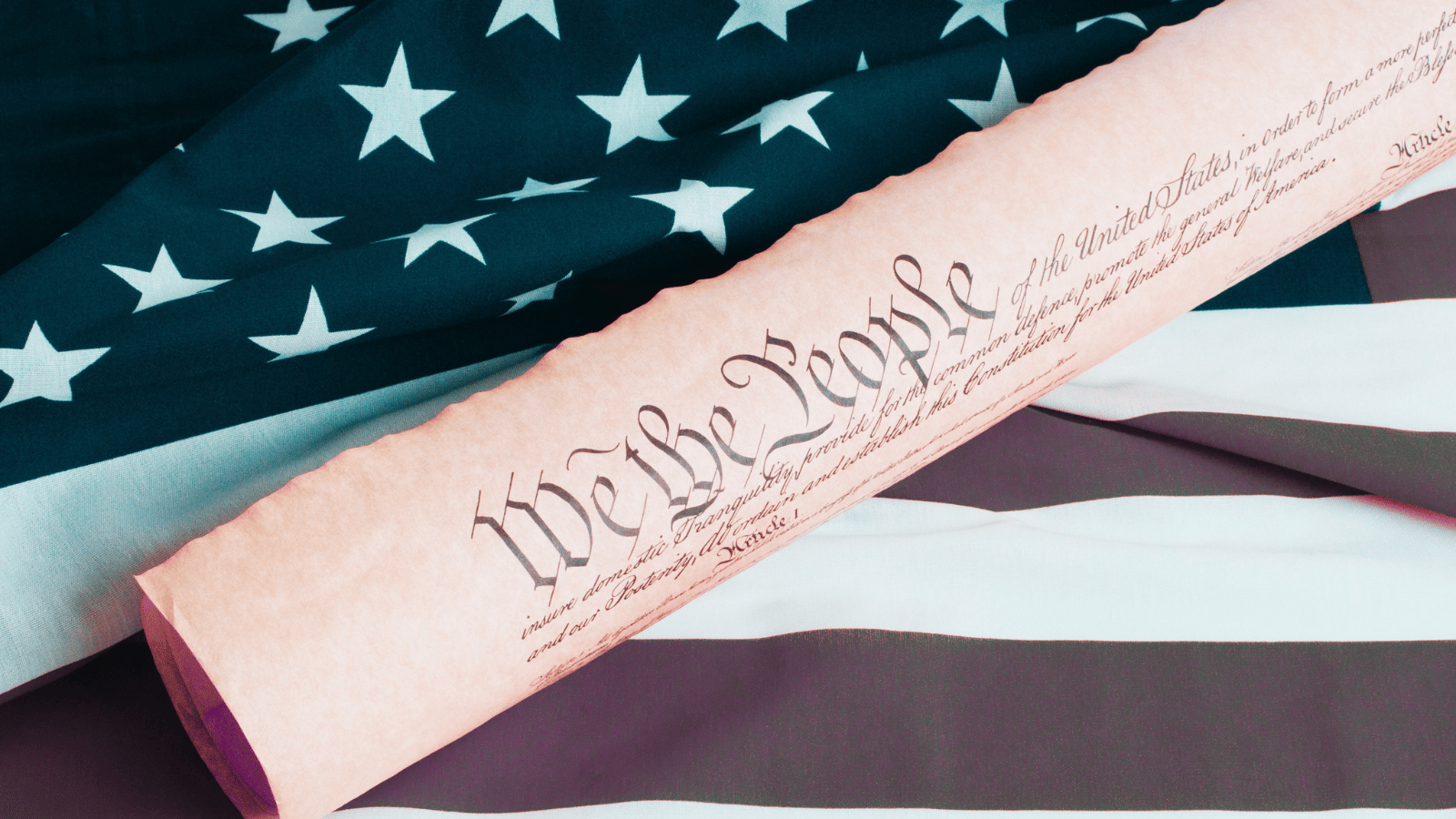 A new poll released exclusively by Human Events reveals that an overwhelming majority of Americans would support invoking Article V of the United States Constitution to call a Convention of States.

The poll conducted by the Trafalgar group in conjunction with Convention of States Action reveals that 65.7% of American voters generally support the idea of calling a Convention of States to propose constitutional Amendments “focusing on term limits for Congress and federal officials, federal spending restraints, and limiting the federal government to its constitutionally mandated authority.”

81.3% of Republicans are also on board with the concept, but support is not split down party lines. 50.2% of Democrats support the concept.

63.3% of those not affiliated with either of the two major political parties support it as well.

Mark Meckler, President of Convention of States Action has made it his life’s work to make exactly that happen. He says calling a convention is  “all about is answering the most simple and the most important question facing the United States today.”

That question?: “Who decides?”

“Does Washington DC decide? Does bureaucracy unaccountable to the American people far away from them decide? Or do they decide for themselves?”

The effort to call a COS is endorsed by many high-profile Republicans and conservatives. Mark Levin, Gov. Ron DeSantis, Senator Rand Paul, and Lieutenant Colonel (Ret) Allen B. West, are just a few.

But Meckler told Human Events left-wingers are right not to view it as a “Republican thing.”

“Because if you listen to what we're talking about there are actually no policy prescriptions,” Meckler explained.

“It’s not about the social issues. It's not about how much spending there should be. It's not about defense vs. welfare. It's just about who decides. So when we're successful, what it means is regardless of whether you're in a red state or blue state, state legislature will have more power,” Meckler said, “And when I traveled with the state legislatures–red state or blue state,–the common theme I hear from state legislators, is we could do so much better if we didn't have the federal government always in our business telling us what to do.”

When asked why he believes a convention is necessary at this point in America’s timeline, Meckler put it simply: “it’s because I believe in federalism.” And a return to federalism, he says, is the only viable option for America’s success at this point.

“I think the country is currently at risk of coming apart. We're going through what I call the Great Decoupling. I think that decoupling is going to happen no matter what,” Meckler said, noting that  “the two parties are getting further and further apart every day.”

“I think there's a lot of dislike and even hatred among people in the country. And so I think we have to figure out what we're going to do with that”

“I’m probably unusual in that I don't think that that's a bad thing. I actually think it's a good thing,” he added.

“The only way, the only road, that I'm aware of back to federalism is to call an article five convention of states and propose amendments to take the power away from the federal government and give it back to the people in the States.”

Meckler is focused on taking back state legislatures in 2022. He currently travels the country alongside former Presidential candidate and U.S. Senator Rick Santorum, a different state almost every week.

Convention of States Action seeks to secure enough support to invoke Article V of the Constitution to propose certain amendments surrounding term limits, the national budget, and federal power over things like education, energy, and healthcare.

It takes 34 states to call the convention and 38 to ratify any amendments that are proposed.

The Congress, whenever two thirds of both houses shall deem it necessary, shall propose amendments to this Constitution, or, on the application of the legislatures of two thirds of the several states, shall call a convention for proposing amendments, which, in either case, shall be valid to all intents and purposes, as part of this Constitution, when ratified by the legislatures of three fourths of the several states, or by conventions in three fourths thereof, as the one or the other mode of ratification may be proposed by the Congress; provided that no amendment which may be made prior to the year one thousand eight hundred and eight shall in any manner affect the first and fourth clauses in the ninth section of the first article; and that no state, without its consent, shall be deprived of its equal suffrage in the Senate.

COS boasts of volunteers involved in over 450 State Races. Volunteers like Diana Telles, a Convention of States District Captain in Ohio’s 52nd district. A stay-at-home mother who homeschools two children, Telles got involved with COS Action when she became disturbed at the government response to the onset of COVID-19 in 2020.

“So it was under, under Trump,” she points out. “I’m looking at, you know, messaging and Fauci and the way people were responding all over the place and on local levels and on state levels and federal levels to you know, shutting down the country. And I'm like, What in the world is going on in this country?”

Telles explains that even in districts like hers, which has a “very conservative” state legislator, advancing support for a COS is still a challenge. “The fear has been imparted upon her,” Telles explains. “It's hard to undo that.”

Supporters of COS reference the same “fear” held by skeptics often. A fear of the unknown, of change, but mainly of the possibility of a “runaway” convention.

Sen. Santorum explains that he held those same fears himself before he became a staunch supporter of the movement, but has strong words for those who he feels are letting fear hold them back from saving the country.

“You hear this all the time about the modern man, modern man, woman, the modern person in America and their lack of courage, their avoidance of risk, and their unwillingness to strive and fight for something that they know is good but are afraid something might go wrong. Thankfully, they weren't there in 1776, but we would still be subjects, not free citizens.”

“I understand conservatives, by their nature, don't like to do new things. That's sort of our nature and we're afraid of new things,” Santorum adds, pointing to conservatives who say “You shouldn’t mess with the Constitution.”

“And I think, I think our founders, they would be upset with a lot of things…They gave a group of people that they trusted to preserve the Republic, and we have not used the tools that they gave… I look at state legislatures and just say they would be so disappointed that you didn't stand up and fight for the rights of the state and the people against the tyrannical government. They would be most disappointed in you that you didn't have the courage to do.”

But aside from his view that fear is a hindrance to freedom, Santorum also asserts that when it comes to the question of a runaway convention, it is also unfounded.

He points out that the convention is simply to propose amendments. “and then any amendments that were proposed, have to be ratified by 38 states. So that's what that is,” he states simply.

“And so in my mind, the argument, that this could be a runaway convention, is in short, impossible.”

Santorum contends that the “only reasonable argument,” given the “mechanics” of the process, is that it will be “impossible to get 38 states to agree to anything.”

“And then the argument would be why bother doing this why all this happened?” His answer to that? “Just doing this is worth it.”

“It’s worth having this discussion. It's worth having America, focus, attention, and debate. And I think what I believe is you should actually find some consensus.”

Rick Green, Founder and President of Patriot Academy agrees. “I love the idea of having a convention even if nothing actually got ratified."

“Let's say it goes on for two months. Well for two months. That's the story on the news every night," Green imagines. "That's what's happening on social media. Everybody's learning about 'Wait, what's this Commerce Clause...What's the Necessary and Proper Clause?' I mean, they'll really get a civics lesson maybe better than our nation has ever had. So I would love it.”

Lieutenant Colonel (Ret) Allen B. West echoes the sentiment that even without ratification, a convention would help to address the separation Americans have from their country’s founding document.

“I think that anytime, anytime the American people sit down and talk about the Constitution, and Rick is an expert on it, that's a good thing

West points to the recent Supreme Court decision about Trump’s Remain in Mexico policy, which he notes “was not something that went through the House and Senate and got voted on and it was…written into law.”

“It was something that was done by executive order. And you don't rule over us by orders, edicts, mandates and decrees, you're supposed to govern over us through the legislative process,” West says.

That leaves only 15 more to go.

In doing so, those states also agree that:

Meckler says this year “several states” are “still in play.” He mentions North Carolina specifically–“The house has already been passed. We’re working on the Senate,” as well as Pennsylvania and Ohio, where he says the effort is making strides.

He hopes these potential resolutions will see the effort secure 22 states this year, with the remaining 12 states on board “no later than 2025.”

Methodology: The survey mentioned in this article was conducted 07/07/22 – 07/10/22 on a sample of 1078 respondents who were considered likely general election voters. Demographic breakdown of respondents is as follows: