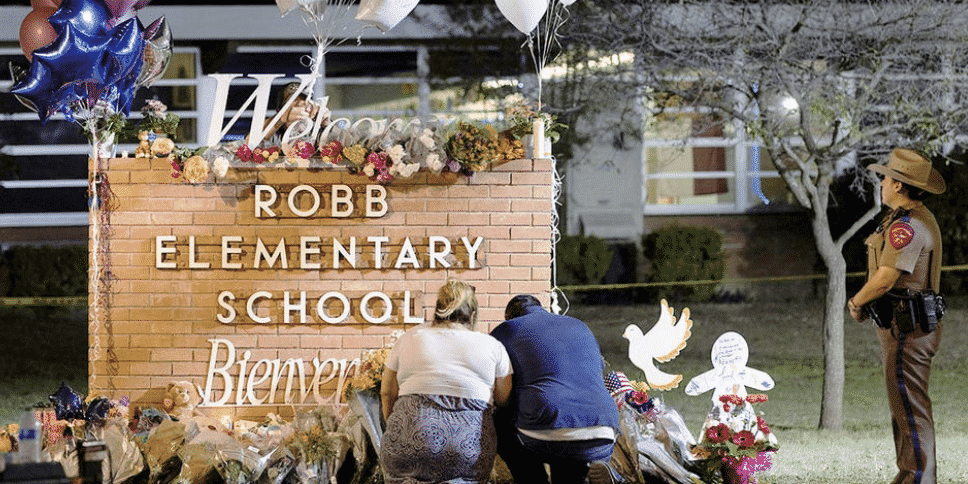 In the aftermath of the horrific elementary school shooting in Uvalde, Texas on Tuesday that left 19 children and two teachers dead, reports about police behavior during the tragedy are raising questions.

The Associated Press reported Thursday that during the 40-minute massacre, onlookers and parents begged law enforcement to enter the building.

“Go in there! Go in there!” witness Juan Carranza says he heard women shouting at the officers during the attack. Carranza, who said he was watching from outside his nearby home, said the officers did not go in.

Pleas from parents and family members for officers to enter the building can be heard on footage circulating social media.

“Shoot him or something!”

“They’re all just [expletive] parked outside, dude. They need to go in there.”

Javier Cazares, whose daughter was killed during the attack, says he arrived to the school while police were still standing outside. Cazares reportedly suggested to other bystanders that they should rush in together, because law enforcement was “unprepared,” reports AP.

“Let’s just rush in because the cops aren’t doing anything like they are supposed to,” said Cazares. “More could have been done.”

Additional reports say the officers kept parents from trying to help their children.

One video shows law enforcement forcing panicked parents to “stay back” as screaming mothers try to reach their children.

“That footage of the officers standing around outside the school in Texas while parents plead with them to go in is devastating. Something has broken in our society,” said Human Events Senior Editor Jack Posobiec in response to the footage.

“In fact it looks as though they even detained one parent on the ground who wanted to go in and save his child. I don’t know how to describe this other than pure horror,” he added.

Others on social media called for law enforcement to be investigated, and held accountably.

The Wall Street Journal reported Thursday that Angeli Rose Gomez, whose two children attend the school, drove to the scene after hearing of the shooting.

But Gomez says even after her 40-mile drive, she arrived to find police “doing nothing.”

“They were just standing outside the fence. They weren’t going in there or running anywhere,” said Gomez.

Gomez says she was handcuffed by federal marshalls, who told her she was under arrest, as she begged officers to enter the building. After eventually convincing officers to unshackle her, Gomez hopped the fence, entered the building, and ran out with both children.

Lt. Christopher Olivarez of the Department of Public Safety told CNN that the shooter “barricaded himself by locking the door and just started shooting children and teachers that were inside that classroom,” adding, “It just shows you the complete evil of the shooter.”

“The bottom line is law enforcement was there,” Department of Public Safety Director Steve McCraw told reporters. “They did engage immediately. They did contain (Ramos) in the classroom.”