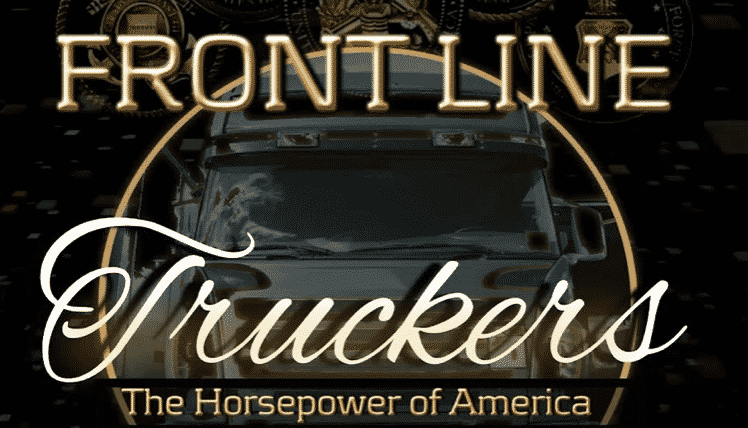 As American truckers get set to roll across the country next week in a sort of 18-wheel shipyard in Gdansk exhibition that is inspired by their brothers and sisters north of the border, Human Events sat down to talk with the organizers of Frontline Truckers, one of several convoys mobilizing independently but with common purpose.  We were also joined by Boots on the Ground Bikers for Trump, a group working in tandem with Frontline.

“My motivation for this is simple. I love my country. I have respect for our veterans. I pledge allegiance to my flag, and I owe a debt to this country for letting me live in a free society.”  That is what Kip Coltrin, the front man for Frontline Truckers said when asked why he is taking part.  “Until about 14 years ago, you wouldn’t have heard about me getting involved in politics.  I was 34 at the time, and suddenly I watched the joy and the happiness of my success brought about by 100 plus hour workweeks for as long as I can remember literally get ripped out from under me.”

Coltrin blames (or credits) the Obama presidency with opening his eyes to political matters.  He has been involved ever since, leading up to his participation in the trucker convoy.

Frontline Truckers will depart from Fresno, California on March 2 and head south through states including Arizona, Texas, Louisiana, and Georgia before turning north toward the outside limits of Washington DC which they plan to reach by the evening of March 6th.  They will not enter the city itself.  In total, Coltrin will travel approximately 3,040 miles before reaching the destination.  The goal is to remain in the area to have constructive conversations with legislators.

I asked Coltrin what he intends to discuss during Frontline’s anticipated meetings.  His agenda is quite substantial.  “You know, the Keystone Pipeline got shut down. Inflation is making the price of fuel soar.  An American working 100 hours a week is just barely hanging on. Our FBI is corrupt. In fact, our whole congressional process, except for a few of the members, is corrupt. What about your farmers and ranchers right now who can't even afford to stay in business? What about the fact that a two-and-a-half-pound roast costs $76!   We spend so much time talking about masks and vaccines, why aren’t we talking about these other things?  That’s what we will address and hopefully shed some light on.”

A media representative for Frontline Truckers noted that it was important for Americans to hear from truckers, especially in this particular moment.  “Everyone is hearing about disruptions in the supply chain.  Since truckers transport our goods, they could be mistakenly blamed.  But truckers are the solution to the supply chain issue, not the problem.”  She then referenced the Frontline truckers’ tagline, “The Horsepower of America,” which brought to mind for this reporter a different sort of fictional movement described three quarters of a century ago in Atlas Shrugged.

RC and Bernadette Pitman, the founders of Bikers for Trump (RC is also a trucker) made it clear that they are rallying their members in support of the truckers and to not just ride alongside, but also to provide logistic support in terms of technology and dispersing information.  “Our organization has been based on creating unity across the country and to protect our children's future from dictatorship and communism,” Bernadette told me.  “We've joined in this convoy to help unite everybody together for the greater cause.”  Bernadette said that the group has drafted pieces of legislation to be presented to congressional leaders for consideration.

Bikers for Trump started in 2016 and today can boast of a membership that fluctuates between 40-60,000 according to the Pitmans.  They have sponsored over 100 rallies during the past five-plus years.

As for RC, he is about as plain-spoken as an American can be.  “We have ruined the American psyche.  We started giving participation trophies for little league baseball and we have created a nation of people who think they are entitled to things.  We aren’t.  Americans only have the basic rights given to us by our Creator and we are supposed to do our best with those things.  We are destroying our country over people getting their feelings hurt. No more participation trophies.”

RC notes that the bikers’ knowledge of routes makes it possible for them to scout and share information in real time through emails and other methods.  This is a key support function of their group for the Frontline Truckers’ convoy.  The Bikers for Trump infrastructure will help to ensure Frontline makes it to the outskirts of DC on what is already a very tight schedule.

Coltrin wants those who can’t join in with Frontline to still do their part to have their voice heard.    “There's so many people that can't make [the trip] with us. We’re all strapped for cash. How do you ask a dad to take off work, bear the cost of lost wages, look his wife and children in the eyes and tell them he’s spending money to go join a convoy? But there's a line to be drawn and a need to do all we can do. We are advising people to rally around their own state’s capital on the 7th-9th.  We want them to help promote patriotism and reignite that American fire again.”

Frontline Truckers says the crowd that will arrive in just under two weeks could range anywhere from 2-6 million.  Each separate trucker convoy has its own route and destination.  All are united in patriotic purpose.

RC summed up the importance of the initiative in his usual straightforward manner.  “We have got to pull together. If the United States fails as a country, then there is nowhere left for anyone to go.  Our government isn’t functioning right now the way it was meant to either by God or our Founding Fathers. If we lose our country, we lose it for our children.  We lose everything.”