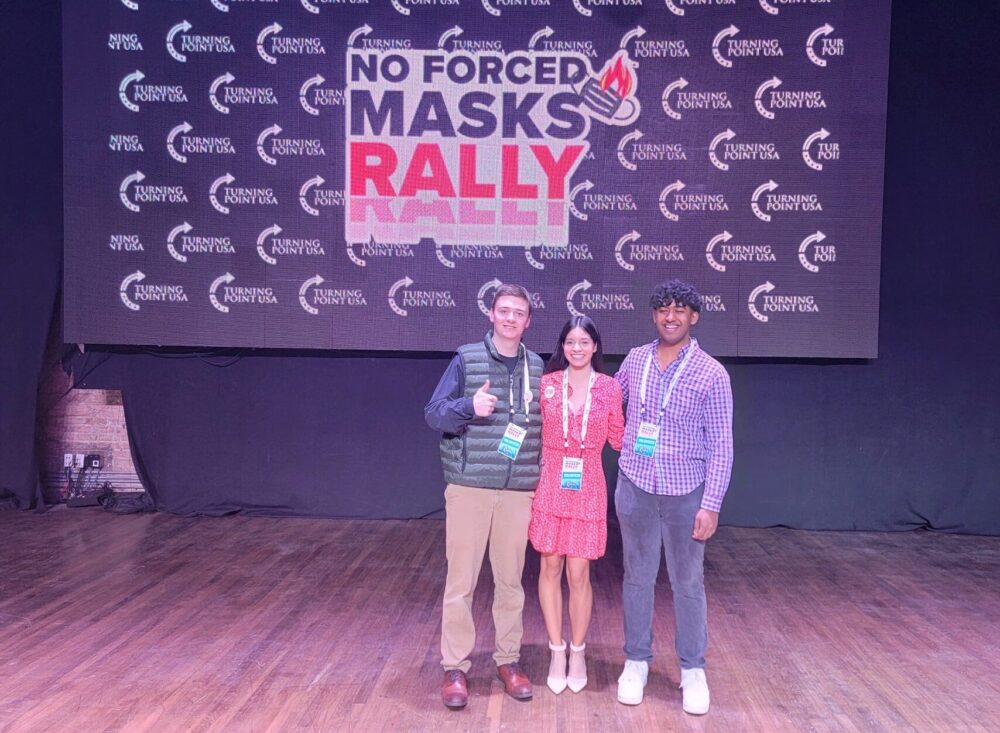 St. Charles, IL:  On Wednesday evening, Turning Point USA held a “No Forced Masks Rally” in a jam-packed Arcada Theater in Downtown St. Charles, a far west suburb of Chicago.  The enthusiastic, banner-waving crowd interrupted speakers with cheers and applause throughout the evening which included speeches by local high school students who have led no-mask walk-ins, and was concluded with an inspirational 30-minute talk from TPUSA founder Charlie Kirk.

As exclusively reported by Human Events this past Tuesday, the rally was put together on short notice after Glenbrook North (Northbrook, IL) senior Peter Christos led a no-mask walk-in last Friday that met with he and his fellow students being initially quarantined in the school cafeteria and ultimately led to Christos’ uninterrupted physical assault by a fellow student which four GBN teachers stood by and watched without intervening.

Kirk pointed to what he calls “safetyism” as becoming a new religion in America.  He then went on to point out the inconsistencies and hypocrisy of the safety obsession in listing a number of ways that deaths and injuries could really be averted that would be much more impactful than making students wear masks.  He then brought attention to the failure to actually followreal science during the Chinese coronavirus pandemic, especially the refusal of the American medical community to use proven and affordable methods for prophylactic and early treatment.

The evening started with Pastor Rob McCoy giving an invocation.  McCoy traveled from his California home of Newbury Park where he shepherds the flock at Godspeak Calvary Chapel.  There was the stirring version of the national anthem offered by Julia Kopfman, followed by something this reporter has never witnessed, the crowd demanding that the pledge of allegiance was also said.

Attorney Tom DeVore, the man responsible for the recent Illinois court ruling vacating Governor J.B. Pritzker’s mask mandate for certain Illinois school districts, gave a powerful opening speech.  Devore has become something of populist hero in the state for his persistent court challenges to Covid restriction over the past nearly two years.

Three students spoke at the event, including Christos who is the leader of the non-school-sanctioned chapter of TPUSA at GBN.  His remarks drew numerous rounds of applause from the crowd, and he ended with an emotional Churchill-like cry of, “Remember you are fighting against the mandates and the tyranny that will affect your children and the future of this country.  And lastly remember we will never back down, we will never give in and we will never surrender.  We the students will not comply!”

The evening concluded with a questions and answersession with Kirk after his prepared remarks.  Those taking the microphone included an elementary school student who wanted to know how to get his classmates to support freedom, a middle school student who had been locked up in isolation for not complying with mask policies, and a Chicago Public School teacher who shared with great emotion having had her children forced out of her classroom during class because of her deemed lack of compliance with CPS Covid policies.  She wept as she shared, “One of the students stood up and said ‘please just leave us alone.  We want to stay with our teacher.’”

Among the numerous VIP’s scattered throughout the audience, Illinois gubernatorial candidate Gary Rabinewas in attendance.  The “ditch-digger CEO” as his podcast is called has launched a challenge to Pritzker who Kirk described from the podium as someone who “was born on third base and thought he hit a triple.”

The Arcada Theater has a capacity of 900.  Attendees were lined up for over an hour for the event which had a waitlist for audience members.  Because of its spontaneous nature, less than 48 hours’ notice was provided.