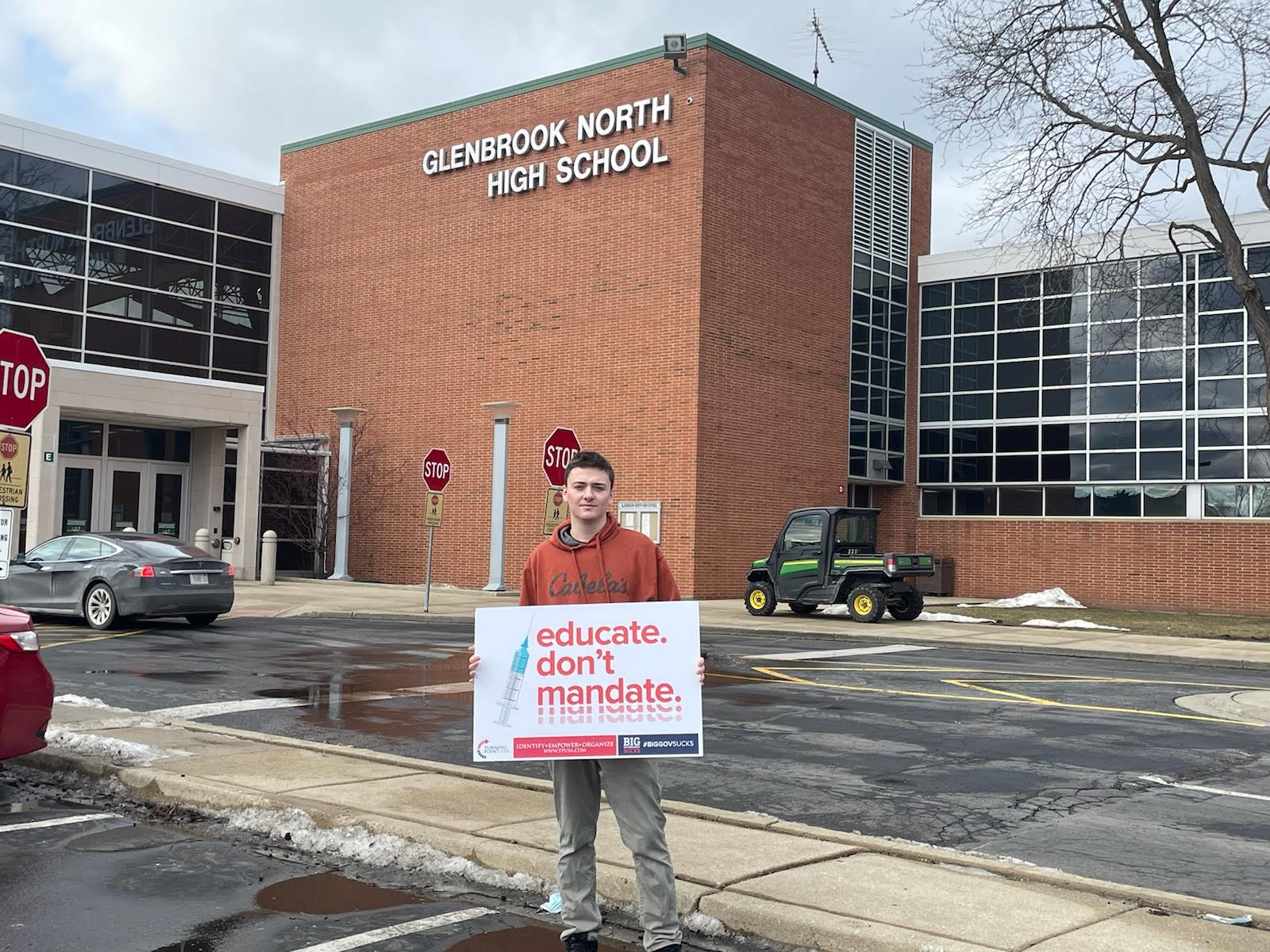 Northbrook, IL:  Glenbrook North High School senior Peter Christos lit a spark this this past Friday in the ultra-woke north shore suburb of Chicago by showing up to school maskless along with some fellow classmates.  The event triggered a physical assault on Christos, and also contributed to the scheduling of a Turning Point USA “No Forced Masks Rally” this Wednesday evening in St. Charles.

Christos, whose previous political activism was reported on by Human Events back in 2020 when he organized a pro-Trump event in Northbrook’s downtown, used social media posts on Thursday evening to suggest the idea of coming to school maskless.

“This was not a walkout like other groups have done.  This was a walk-in.  We want an education,” Christos said.  “On Friday morning we met outside the cafeteria doors and walked in together.”  When Christos and the other students arrived, they were greeted by the GBN principal, deans of the school, and security.  “There were only about twenty of us, but there were like a hundred students out behind the glass doors of the cafeteria watching.  We were told to put on our masks and I politely and respectfully said that we declined.”

Christos said that the purpose of the action was to draw attention to the unreasonable nature of the mask mandate policy, especially in light of the fact that Illinois Governor J.B. Pritzker is eliminating the statewide mask mandate as of March 1, except for schools.  Pritzker is leaving the school mandate in place despite a recent court order that overruled the requirement for certain Illinois schools, and without regard for scientific evidence that Covid-19 is less harmful to young people in general.

Christos had students cheering for him outside the cafeteria and he ultimately stepped up onto a lunchroom table and gave a brief speech.  “I talked about how the real crisis [for young people] is gun violence, gang violence, and mental health. They don't want to acknowledge the fact that more kids have died in the city of Chicago from gangs than across all of America from COVID.   They don't want to acknowledge that students are at the lowest risk. So, while on February 28, when Pritzker stops the mass mandates for anyone that can go to casinos, bars, restaurants, or shopping, they don't have to wear a mask.  They can be elderly; they can have preexisting conditions. They could have all these things, but the students who are at the lowest risk have to wear masks eight hours a day in the classroom, which is ridiculous.”

The group was ultimately moved from the cafeteria to an office area where they were held for a while before simply being released back into the general student population.  Things didn’t end there for Christos, who was then physically assaulted by another student.

As I was walking my friend to her class, we're going to go up the spiral stairs. And as I was walking up, student approached me, proceeded to swear at me say ‘f**k you, wear a mask’.  He flipped me off and reached for me. My hand was cut.  Then he proceeded to grab me from behind. While all this was happening, there were four teachers, three of whom seemed to be cheering him on.  I’m not sure anymore, but they were not intervening. That was so negligent for them to let that happen.”  Christos said that the teacher’s excuse after the fact was that the assaulting student had “special needs.”  Christos’ response was “well, everyone has something.  It doesn’t mean they should be allowed to assault me.”

Christos had started an off-campus chapter of Turning Point USA last year as GBN would not provide a teacher sponsor for the organization.  His recent holding up of a TPUSA sign and having the photo posted on social media drew a good deal of hate from fellow students.

“After that picture posted, that's when the harassment started happening. People screenshotted that picture off my Instagram and were writing like some like horrible things. It's like, ‘My name is Peter. I'm a COVID Spreading piece of sh**it,’ or, “I love (expletive for sodomy)’. There's all this messed up stuff. They made a fake Wikipedia page they posted on the GBN Wikipedia. They said Peter Christos was running away from teachers who were telling him to stop and he was in the science wing crying. That's not true. I recorded the whole thing and I left with my friend. They didn't kick me out of school. And there was these like, disgusting, disgusting posts about me on Wikipedia that I'm not even going to repeat.”

Peter’s actions, along with a couple of other dissident Illinois high school students, caught the attention of TPUSA founder Charlie Kirk.  That led to the scheduling of the “No Forced masks Rally to be held Wednesday evening in St. Charles, IL at the Arcada Theater. The rally will include remarks from Charlie Kirk, local area leaders, and students, including Christos.

Local school mask protests erupted throughout the Chicago suburbs and have spread across social media after an Illinois judge ruled that Governor J.B. Pritzker overstepped his legal authority when requiring masks at school. Governor Pritzker has appealed the ruling and Chicago Public Schools has said mask mandates will remain in place despite the court’s ruling.

Turning Point USA founder Charlie Kirk, had this to say when asked by Human Events.  “Students like Peter are showing great courage in being willing to take a personal risk in peacefully speaking out against the authoritarian actions of government schools that are not supported by science, but are instead motivated by a need to control.  That is why Turning Point has organized this rally.  We want them to know they aren't alone, and that their dissident-style activities have national support.”

District 225 was made aware in advance of the student-run protest and walkout regarding the current statewide mask mandate before school on February 11, 2022.

Please know that District 225, including Glenbrook North and Glenbrook South, is continuing to follow its current COVID-19 masking and quarantine guidelines. If a student chooses to be part of the indoor protest, they will be sent to the Dean's office. If they choose to miss class this would count towards an unexcused absence and could potentially face other disciplinary consequences.

When Christos was asked what advice he would give to other high school students who might be considering activism, he said, “In life there’s always going to be a counter argument. There's always going to be disagreement, but you need to do what's right for yourself and your future. We can't just sit by and let what's happening happen without acknowledging and holding these certain people, school boards, politicians accountable. And I urge everyone like get involved before it's too late. Because so many people so many, like older people regret not stepping up when they should have and like once the past is in the past, you can't you know, you can't do anything about it. You can't go in the past, but you can also determine the future. And that's a good way to put it.”

To attend the rally, attendees can register for the event at TPUSA.com/Rally.