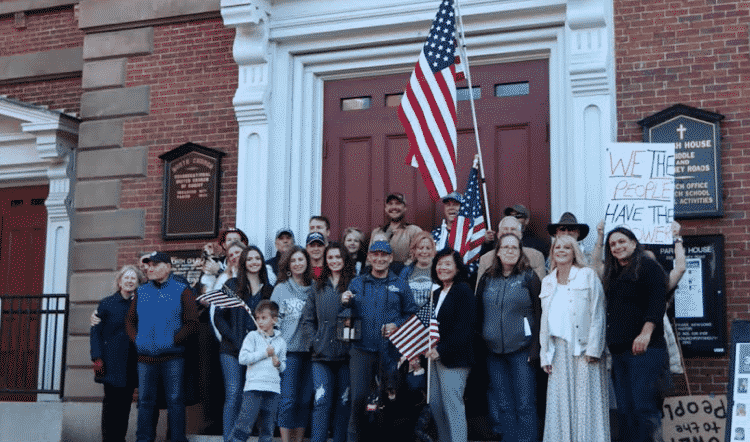 The first stop was in Boston where a small and solemn ceremony was held in tribute to Revere and his patriotism.

The Liberty Lantern is being carried across the country in a symbolic tribute to Paul Revere’s historic ride of 1775 and to celebrate the awakening taking place across the country regarding the threats against individual liberty. All Americans know the, “one if by land, two if by sea” planned signal to alert New Englander’s as to how the British were advancing.  The message from Unite the Light is that those hostile to today’s America are already on our shores and among us.

“I’m just so genuinely filled with excitement and hope,” said Unite the Light’s visionary, Felisa Blazek.  “It was only a few weeks ago that the idea for this came to me and I have been overwhelmed by how patriots all across the nation have embraced it and volunteered to help.  It has been a lot of work, but I have never felt alone in the project because of the tremendous support being given.  I have been inundated with requests to participate.  Its humbling and it reassures me that the effort is all worth it.”

The Liberty Lantern will make its journey across the country using planes, trains, and automobiles.  The project is being supported by people from all walks of life and as diverse as Native Americans, an airline pilot group, an African American community activist, and northeast logger.  “We have an actual lumberjack-type taking it across one state in his logging truck,” Blazek shared with clear amazement.

“Each person who carries the Liberty Lantern is being chosen for their participation and commitment to being part of the fight to restore America,” Blazek states.  “They are true active dissidents pushing back against tyranny and willing to put real actions behind their words.”

Those who carry the Liberty Lantern in a sort of  controlled "chain-of-custody" will be asked to post a two-minute video sharing what the experience means to them and what they are doing to help preserve the Republic.  There will be a variety of surprises along the switchback-like route the Lantern is set to travel and some highly recognized names joining in.

“This is bigger than I’m able to share because of the real concerns about possible threats from protest groups,” Blazek states.  “But all I can say is that people need to follow our journey because it is going to be inspiring.”

Anyone interested in following the travels of the Liberty Lantern or trying to find ways to support or participate, can do so by visiting the Unite the Light website or by joining the Facebook or Telegram groups.