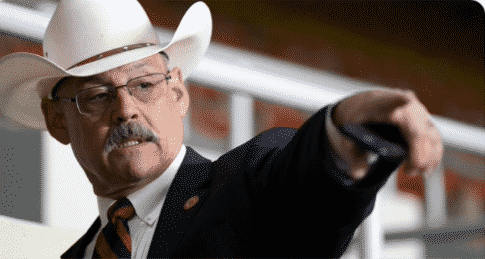 Mark Finchem, the State Representative from Arizona who has also received the endorsement of former President Donald Trump in a bid to become that State’s Secretary of State in 2022, has effectively taken his Arizona Ballot Integrity Project (BIP) national as of this past Wednesday when he and approximately 30 others from around the country gathered at the suburban Dallas offices of international authentication leader, Authentix, to create a process for introducing a highly counterfeit-resistant paper ballot.

Attendees were a mix of technology experts, politicians, election officials, and election integrity activists.  States represented included Arizona, Michigan, Virginia, Tennessee, and New Hampshire among others.  The first portion of the meeting had experts from Authentix making various presentations to the group detailing the technology involved in the process.  The second half was a working white board session where the group collaborated in designing the rollout process.

When asked how he got the idea to initially launch the BIP, Finchem said, “Back between September and November of last year there were rumors circulating that somehow ballots had been secretly watermarked.  Those rumors were not true.  But it got me to thinking, what if they could be?”

That question ultimately led to him being introduced to the Chief Sales & Marketing Officer of Authentix, Kent Mansfield.  “At first I didn’t know what to think when I got the request,” said Mansfield.  “We had never done a project exactly like this, but I also knew Mark was serious about making this happen.  Without any spec’s, this was an open opportunity for our people to create.  I worked with our teams to design a concept and once we had it, it took about thirty days to produce a prototype.”

That prototype found its way to Finchem in March of 2020 along with a UV light.  The question-asking Congressman then asked Mansfield if he would come to Arizona to meet with House members as they were in session.  Mansfield made the trip two weeks later and the response was impressive.  “We went down into the House basement and turned on the UV light,” Finchem states.  “Everyone was impressed including the on-site representative from the Arizona Association of Counties …and she’s hard to impress.”

The ballot & its architects:

As currently designed, the proposed paper ballot contains multiple authentication and tracking features making it almost impossible to replicate by anyone interested in election tampering through the creation of phony ballots.  “If someone has enough time and enough money, and enough determination, anything can eventually be counterfeited in theory,” Mansfield said.  “The key is to create such complex barriers that it becomes unfeasible to even try.  Nefarious people tend to be in a bit of a hurry.  Making the job simply too big deters them.”

Authentix was started in 2002 and has offices located worldwide.  Their authentication projects ranged from protecting currencies, pharmaceuticals, agrochemicals, and tax stamps.  They even provide fuel authentication to help prevent adulteration, tax evasion, and franchise abuse.  “Authentication is what we do, and it is all we do,” says Mansfield.  Authentix was born from a merger between U.S.-based Isotag and U.K.-based Biocode.

When asked about the potential problem of steering people toward paper ballots in a nation obsessed with the bells and whistles of digital security, Mansfield says,” We get that question all the time.  It is often the case that a newer technology comes along that can be deployed that simply wasn’t available at the time that the last technology was deployed.  This is brand new technology.  It is a way to serialize documents.  It can let people know that the document that left is the actual document that came back.”  This lets people track and interact with their ballot and the government can know it is a legitimate ballot.”

One of those in attendance at the session was the Cochise County Arizona Recorder, David Stevens.  Stevens said that the 2020 election would have been routine if a federal judge hadn’t ordered a change in their voter registration rules. That, coupled with a massive turnout, complicated matters.  “We had an 800% increase in our in-office voting during the 29 days we were open,” Stevens said.  “With a huge early voter turnout, we had concerns over how to secure ballots.”

Stevens went on to say that 1993’s National Voter Registration Act  (NVRA) was positive in the sense that it set standards for election, but the differences between the 50 states still make it difficult for comprehensive solutions.  “If we can get all ballots on this Authentix designed paper, it would be a big step toward solving all the problems encountered in the 2020 election. It is my hope that Arizona can become the tip of the spear that eventually turns into a national movement to secure elections going forward.”

The support of local officials like Stevens’ for the initiative is critical because they are the ones who oversee elections at the county level and who will need to get behind implementation to make approval more palatable to politicians and more successful with staff and volunteers in any eventual rollout.

This is, in the end, Mark Finchem’s baby.  His soft-spoken slight drawl gives way to a transparent combination of fierce intelligence and determination when he speaks.  “It is easy to do this if we can just successfully challenge the status quo.  Challenging the status quo is difficult for politicians but we are at a point in time when voters want someone to be their champion and make sure their legitimate vote is counted.  When I ask constituents what they think is more important in election vote counting, speed or accuracy, the overwhelming response is accuracy.  Timeliness matters, yes, but accuracy is the primary concern.”

What started as Finchem’s Arizona BIP, quickly became something more as word spread of the efforts.  “I have had seven states approach me who are interested in getting started and 38 others who have expressed an interest in learning more,” he said.  That level of national interest is what eventually led to the Wednesday meeting with contributors from around the country.

The next step for this counterfeit resistant paper ballot initiative will the development of a proposed process created from the Wednesday meeting.  Then Finchem will submit that process to what he calls a “Murder Board.”  The Six-Sigma certified businessman explains the concept by saying, “If the objective is to implement it over the objections of others, then it makes sense to get people who object to it to try and destroy every premise in it.  If we can overcome that, it makes the whole project stronger.”

Finchem will still face a challenge in getting the process approved in Arizona where money has been appropriated for the new ballots, but the process has yet to be legislatively approved.  With a very narrow one vote majority in both Arizona houses, Finchem knows he has a fight on his hands.  “Democrats have already come out against this,” he states.  That is an interesting position to take given that the only people who tend to be against eliminating counterfeit currency are counterfeiters, themselves.   This calls into question the motives of politicians who are against making counterfeit resistant ballots the standard.

Finchem wants the people to become activists in this.  “The real power in our country is held by the people, not the government.  When you empower people, that’s when things change.  I’ve never seen people so awake to the fact that their vote really does matters.  In Arizona, we set the initial bar for forensic election audits because there had never been one done anywhere before.  Now we are setting the bar for ballot integrity.  I want people around the country to see it and fight for it where they live.”

Finchem concluded his remarks at the meeting Wednesday by sharing with the group his three compelling statements to convince people this is the right idea.  “First, the cost of one of these secured ballots is less than a Forever postage stamp (25 cents versus 58 cents).  Second, if you have a document that represents your consent to be governed (a vote), then isn’t that as important to protect as the currency in your pocket?  Finally, if your elected leaders want to protect the status quo and not provide you with a secure ballot, throw them out!”

You can learn more about the Arizona Ballot Integrity Project at   www.VoteFinchem.com/