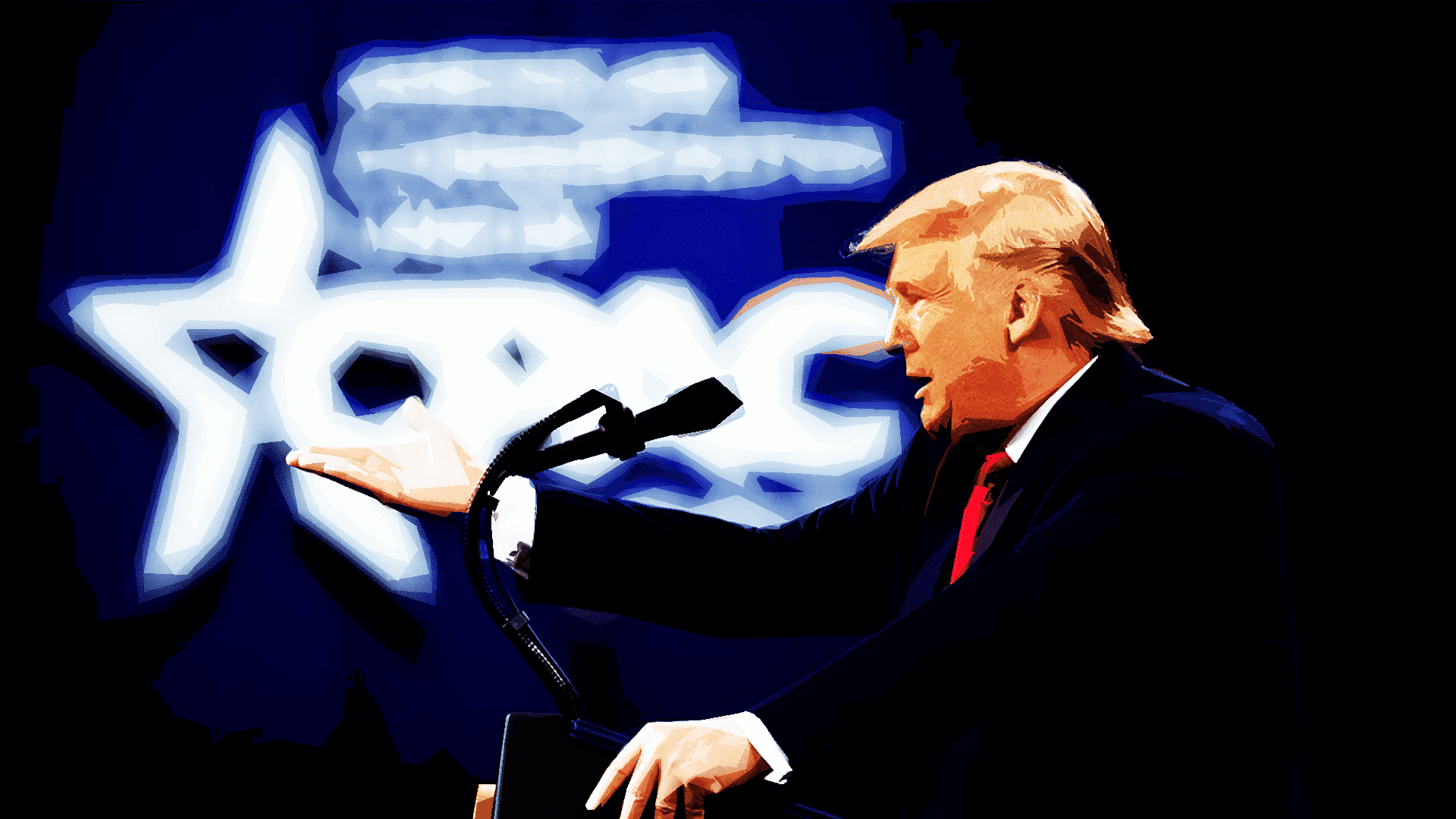 After watching former President Donald Trump’s speech at CPAC on Sunday, I was left with a number of very specific observations and conclusions, all of which could fall under one general overriding thought: I’m really glad the former President doesn’t paint.

It has become something of a cultural phenomenon for former presidents to do something more properly covered by the “Life” section of USA Today than the “News” section. George W. Bush likes to paint. His father was fond of skydiving on his birthday. Barack Obama is hanging with Bruce Springsteen on Spotify and discussing what’s “trending.” Jimmy Carter built houses with Habitat for Humanity.

Whatever strings these former presidents pull or pulled behind the scenes, when public-facing, they like to present themselves as being somewhere beyond everyday politics. That is clearly not the pose to be struck by former President Trump. He made it clear on Sunday that he is here to stay, and he is going to continue in his role as party leader.

It’s a good thing. Right now, if his intention was to pass the baton, he would only hear it land on an empty political cinder track. Because while there may be some who are trying to catch up, at the moment, there is no clear choice as to who will fill his shoes as party leader. If he had chosen to step aside and sign up for group activities director in a Del Webb community, the Republican Party would be lost and the movement he started would likely be so scattered as to be rendered ineffective, or it might just vaporize altogether.

In watching the speech, here are the twelve key points I took away:

1. HE IS NOT GOING TO TRY TO START A NEW POLITICAL PARTY. Despite rampant speculation, he made it clear that he is going to plant his flag and make his stand inside the Republican Party. This is great news for those who believe in his America-first ideas. It is bad news for people like Mitt Romney, however, who would like to see the party return to its more traditional Chamber of Commerce, country club roots.

2. HE IS VERY MUCH IN CONTROL. The former President was deliberate, almost measured, in his remarks. While not yielding with regard to his core values or ideas, he expressed them in a way that was a bit more direct without seeming frenetic. The incredible harassment he faced during his presidency, coupled with the November 3rd election tampering, previously had him very on edge and angry. After a month-plus away from the microphone, however, he seems to have taken a couple of deep breaths. He reminded me of Donald Trump from 2015.

3. HE MADE IT CLEAR HE IS GOING TO BE A DIRECT CRITIC OF JOE BIDEN. There used to be a tradition among former presidents that they did not criticize their successors while in office. Barack Obama brought that tradition to an unceremonious close with his constant criticism of then-President Trump. Being willing to take on Biden in terms of policy specifics sets the former President up for a run in 2024, if he so decides. Which leads me to…

4. IT LOOKS LIKE HE JUST MIGHT RUN AGAIN. This is something he hinted at by saying maybe he’ll have to “win a third time.” At age 74, there is of course no way to say today what he might decide a couple of years from now. Knowing him as I do, if I had to make a prediction, I would say that he will. That said, what he will have to decide is whether or not, at this moment in time, he can make a greater impact as “king” or “king-maker”?

5. HE SET THE RECORD STRAIGHT ON WHAT HE ACCOMPLISHED. Whether it was pointing out his administration’s role in getting the CCP virus vaccine produced, dealing with the border crisis, or ending endless foreign wars, he started to write the outline for historians who want to describe his administration. What will be written will depend upon who is doing the writing, of course, but for those who want to write truthfully, the former-President is going to make it easy.

6. HE WAS ABLE TO SAY, “I TOLD YOU SO,” IN AN ACCEPTABLE TONE. This had to be difficult for him. Had to be. He did a good job of walking the line and reminding everyone listening what the Democrats have done, both before and after the election, was all easily foreseen. “I told you so’s” can easily come across as sore losing or whining. Sunday’s reminders from the former President sounded more like reflection than they did remonstrations. People do need to remember that he warned us.

7. HE PUT THE DEMOCRATS ON DEFENSE. Largely because of his measured tone, he puts the Democrats in what must be the unexpected spot of not being able to promote a “Trump unhinged” narrative we’ve grown so accustomed to hearing. There is no doubt in my mind that they were looking for ways to say he is still trying to instigate trouble. Instead, he left them only with their one drumstick and a broken snare to just keep beating: “January 6th.” Eventually, that drumbeat will fade on them, and they will have to find fresh ways to frighten Americans into compliance.

8. THE MSM HAS GOT TO BE HAPPY. While the former President made it clear he isn’t coming unglued, he also made it clear he isn’t going away. This thrills the MSM, which saw rating and circulation levels increase over their repetitive smearing of the man while in office. If he weren’t sticking around, they might be forced to commit random acts of journalism and cover the failed policies of the Biden-Harris-Biden administration. Fear not, Chris Cuomo. Your brother's misogyny will be below the fold for a while. You still have Donald Trump to kick around.

9. HE DEFINED “TRUMPISM.” This speech did a good job of identifying the key elements of what you might call a “MAGA Doctrine.” America-first-ism is about protecting the jobs of American middle-class workers, keeping America out of foreign wars that are not in our national interest, making sure our borders are secure, and so on. The makings of a 2024 Republican Party platform were in this speech—a platform that can be written no matter who is the nominee.

10 (and 11). HE DID NOT HYPER FIXATE ON THE ELECTION FRAUD, AND HE PRESENTED SPECIFIC SOLUTIONS FOR FIXING FUTURE ELECTION PROCESSES. This is something I had a chance to discuss with him in person prior to the speech. There was a clear need to not turn a forward-looking address into a rear-view rant over the injustices of November 3rd. He avoided that trap. He knows that a majority of Americans believe there was election interference. What they want to know now is what to do about it so it doesn’t happen again. To that end, he offered ideas. He showed poise and restraint in what is such an understandably emotional topic for him.

12. HE HIT BIG TECH RIGHT BETWEEN THE EYES. He went after Big Tech censorship, hard. Not only does he keep his national base awake and attentive to the problem, it provides air cover to state-level leaders like Governor Ron DeSantis in Florida who are showing a willingness to play David to Big Tech’s Goliath. Big Tech played a big role in the elections of 2020. Everybody knows it. Like Donald Trump, the Big Tech issue isn’t going away.

I felt energized by the former President’s speech. It made me feel like there is hope. With his leadership, we have a real chance to take back both the House and Senate in 2022. Without him, I fear that the Republican Party, the entire nation, could slip into an abyss from which we could not return.

That is not to say we do not have work to do ourselves, of course, nor that we should rely upon him completely. At age 74, Donald Trump can be the leader of the Party for perhaps the next decade, but not the next generations. We need to build on the opportunity he has given us, and demonstrate the willingness to fight as he has shown to us. He can’t do this alone, and he can’t do it forever.

While we still have access to his energy and his leadership, we need to take advantage of it, and use it as something we increasingly build upon instead of relying upon. His commitment to remain at the center of Republican Party politics means that our window of time to turn MAGA Doctrine policies into mainstream Republican policies has just expanded. We need to use that time productively and wisely.