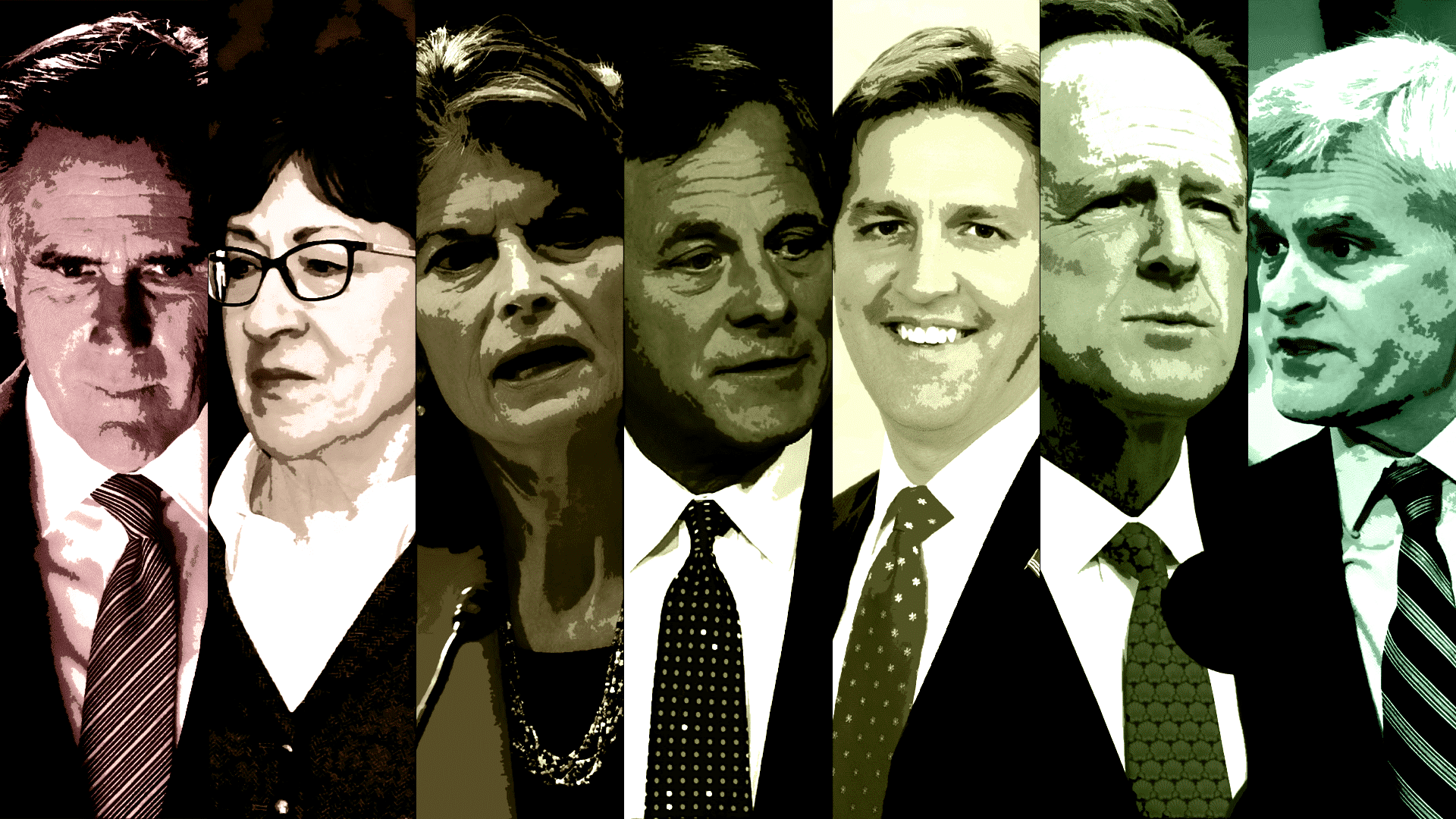 These are the seven GOP Senators who voted to convict former-President Trump and bring back the good ole’ boys (and girls) country club, Chamber of Commerce, Republican party. In a process that looked staged and scripted, Trump was charged by the House for insurrection, then tried and acquitted by the Senate. The Senate's vote was straight “party line,” save for this “gang of seven.”

How do we know that these seven were the ones who turned their backs on both their constituents and on the idea of putting America first? We know their names because the vote was a roll-call vote, and there was nowhere for them to hide. My question is: What would the vote tally have been if the Senators had been allowed to hide in anonymity?

[O]nly a few weeks prior, Cheney was one the 10 globalist, Chamber of Commerce-type Republicans who voted to impeach the President...

On this Sunday’s ABC’s This Week, Delaware Senator Chris Coons made it clear that he thought the vote could very well have been different if it had been done in secret. He felt it would have been certain that the former President would have been convicted if the Republicans could have hidden their vote from the people (my paraphrase of his sentiments).

On February 3rd, House Republicans hid behind closed doors to decide whether or not Liz Cheney should remain in her position of Republican conference chairwoman. The vote was needed because only a few weeks prior, Cheney was one the 10 globalist, Chamber of Commerce-type Republicans who voted to impeach the President after hearing no witnesses and considering no evidence. Cheney held her chairwoman position with a resounding 145-61 vote victory.

Only three days later, Republicans in Cheney’s own state of Wyoming, the state where she was elected to represent the will of the people, voted to censure her for her vote to impeach the President. This means that Cheney will be denied GOP fundraising money should she run for reelection in 2022, and she is also being asked to pay back money donated to her campaign this past year. Cheney has a 60% disapproval rating in Wyoming only a few months after being reelected.

Think about it. The Republicans in the House leave Chaney in a position of power and prominence even though her own constituents and her own state party say, clearly and overwhelmingly, that they are done with her. In what universe can politicians be so cavalier in ignoring the will of the people (also known as voters)?

The answer is easy. It’s in the universe where a politician can openly ignore the voters because the voters do not know how the politicians actually vote.

I was personally shocked that more Republican Senators did not vote for former-President Trump's impeachment. Not because he should have been impeached. Any rational person, and I mean fully-rational, regardless of their politics, knows that the entire process was based on a phony narrative. I was surprised because I know full-well that Donald Trump’s America-first agenda was offensive to establishment Republicans, of which there are many, and this was a chance to finish him, and his ideas, off once and for all.

But, because of the Senate voting rules, they had to finish him off in the bright shining light of the public eye. Unlike the cowards in the U.S. House who voted for Cheney even though her own citizens in Wyoming wouldn’t, the members of the Senate had to make their votes known. Despite what the MSM would like you to believe, that would have been very unpopular.

According to Rasmussen (the only polling group that has been doing their polling the same way for years and, frankly, the only one that does not seem to show a bias in its sampling techniques) the day after President Trump left office, January 21st, his final overall approval rating was 51%. This for a President who was being charged with insurrection and had every major media outlet in the country accusing him of trying to overthrow the American government.

On January 27th, after Cheney et.al. had already impeached the President, without any sort of serious investigation or deliberation, Gallup reported his popularity standing at 81% among Republicans! He has Ronald Reagan level loyalty among party members. This is not a man who is leaving office disgraced and in shame. This is a man leaving office and forcing his political opponents into disgrace and shame for labeling him something he wasn’t: a traitor.

[E]verything the House and Senate do must be done within the full, clear view of the public.

The House vote for Cheney and the Senate vote on impeachment, seen in juxtaposition, give us a clear understanding as to why everything the House and Senate do must be done within the full, clear view of the public. I have no way of knowing what might have happened if these two different votes had had a reverse set of “disclosure” circumstances. Would the House GOP have sacked Cheney if they had to be on record in supporting such a toxic party member? Would more establishment Republicans have voted to impeach a very popular President if they thought they could get away with it?

I wonder about Mitch McConnell. I wonder about Lindsey Graham. There are a host of Republican Senators that my friend Jeff Webb at Human Events would call “feckless” who might very well have tried to permanently disable President Trump if they could have done so without revealing their vote.

There is nothing that members of the U.S. House and Senate should be able to do when acting in their official capacity that is not fully visible to their constituents and the American public at large. Much has been written over the last four years about threats to our “democracy” (they mean “republic,” they just don’t know any better). The greatest threat to our country comes not from the actions that take place in the public square, visible to all, but from those taken behind closed doors.