Lance Armstrong, Lyndon Johnson, and their Legacies of Cheating. 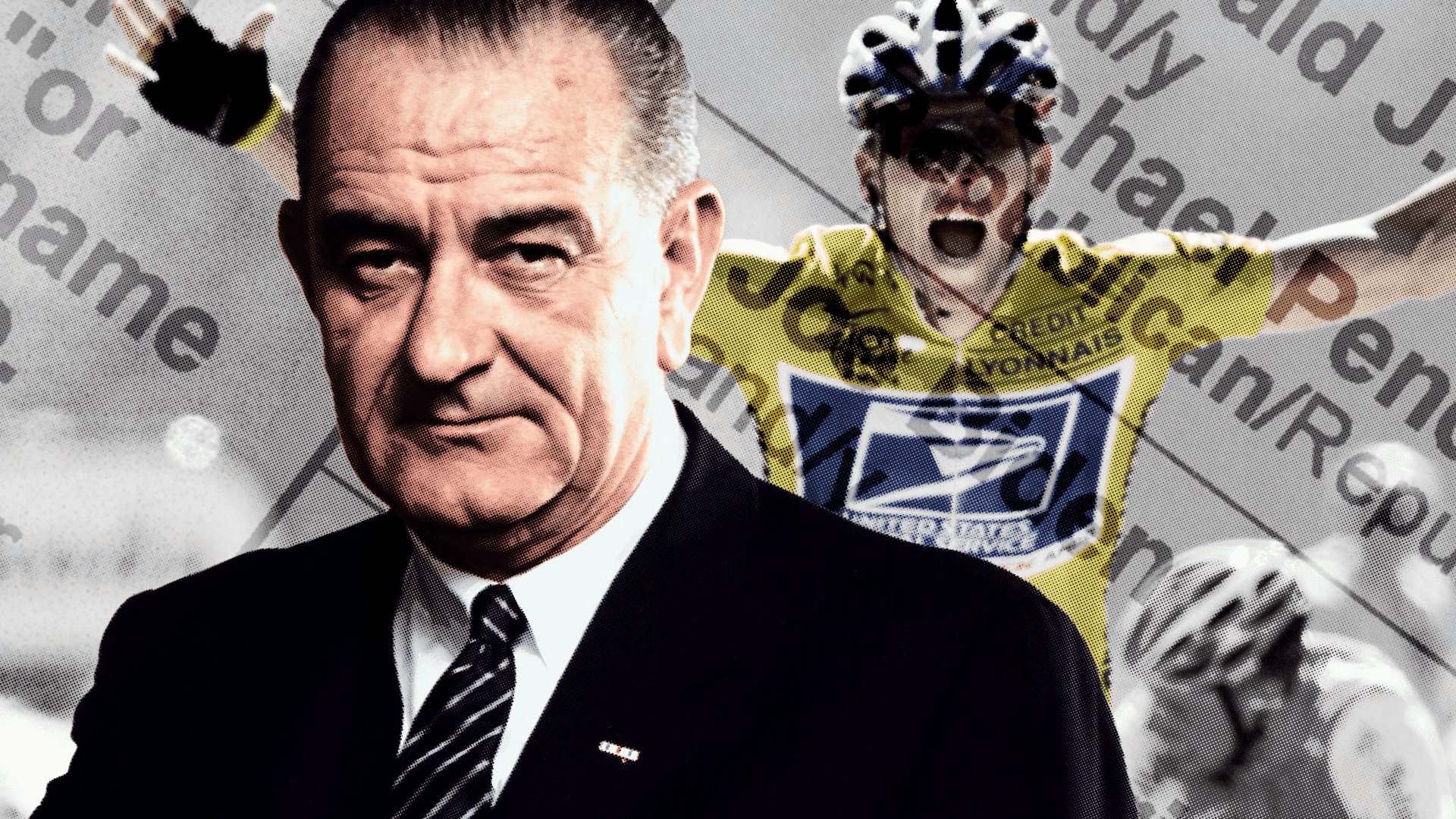 Sometimes the best way to make sense of the present is to draw from a story from the past. Looking at the overwhelming evidence of election tampering that has taken place in 2020, and how that election tampering has made Joe Biden the odds-on favorite to become an undeserved President, I am putting it all into perspective by looking at two seemingly unrelated but very famous and very corrupt Texans: Lance Armstrong and Lyndon Baines Johnson.

Sometimes the best way to make sense of the present is to draw from a story from the past.

Armstrong, of course, was the winner of seven consecutive Tour de France cycling championships—until he wasn’t. Having been ultimately caught cheating through the use of steroids, all seven titles were stripped from Armstrong retroactively in 2012.

Johnson, meanwhile, was the 37th President of the United States. A vile, hateful, and racist man (even the very pro-Democrat MSNBC platform had to make that admission amidst overwhelming documented evidence), he had a tremendous impact on the Democratic party, American political and economic culture, and America’s attitude toward military use. While these two Texans might seem to have little in common at a glance, they both share the attribute of being egregious cheaters who were caught. Armstrong used anabolic steroids to gain an unfair advantage in a sports competition; Johnson had the curious case of “ballot box 13.”

As half our nation intently watches numerous investigations of mischief-making in this year’s election, and the other half stubbornly denies the possibility, it is worthwhile to revisit these two famous figures—and to be reminded that people who cheat might be able to run (or cycle) for a little while, but they cannot hide forever.

A TALE OF TWO CHEATERS

When I was a kid, Lance Armstrong was a hero of mine. His poster hung on my bedroom wall; he symbolized just what a dedicated athlete can accomplish through hard work and training. A survivor of testicular cancer, Armstrong began training after his recovery and went on to win an astonishing seven straight Tour de France titles. Claiming “Le Maillot Jaune” is considered one of the greatest achievements in all of professional sport. Armstrong did not just claim that jersey once; he claimed it at the end of the Tour seven years in a row. He was a role model for me.

The forced forfeiture of Armstrong’s titles proved that a victory achieved dishonestly in the moment does not necessarily get to stand in perpetuity.

Then all the cheering turned to sorrow, for me and likely hundreds of thousands of other young admirers of Armstrong. In 2013, Armstrong sat down on the Oprah Winfrey Show and confessed to having cheated throughout his prolific run of cycling championships. Armstrong’s house of lies started to collapse in 2010, when former cycling teammate Floyd Landis (who had won the 2006 Tour, but had the title stripped after a positive performance-enhancing drug test) outed Armstrong to the Wall Street Journal. Armstrong denied the allegations at the time, but ultimately, under the weight of investigations and undeniable evidence, was forced to confess.

In his interview with Winfrey, the cheater was arrogant and unrepentant, saying that he saw his cheating as a way to “level the playing field.” What he did, of course, was ultimately level his own career. In his moment, Armstrong was the greatest champion in the sports world. Then, as so often happens in life, the sins of his past caught up with him. The man who made us cheer and wrap ourselves in the flag, the man who gave us Livestrong with its healthy ways to live and love life, the man who gave us rubber bracelets to wear to help people fight cancer, that man became nothing more than a disgraced former icon.

The forced forfeiture of Armstrong’s titles proved that a victory achieved dishonestly in the moment does not necessarily get to stand in perpetuity.

Moving to Lyndon Johnson, the man who created the playbook for teaching Democrats how to rig elections. In 1948, Johnson planned to run for the U.S. Senate seat in the state of Texas. He had been serving as a Member of the U.S. House, and his ambition, like Caesar’s, was to be king.

The initial primary was held on July 24th of that year. In a situation that brings to mind current day Georgia, the frontrunner, Coke Stevenson, was unable to collect 50% of the vote, so a runoff election between him and Johnson had to be scheduled for August 28th, 1948.

Knowing that the election was going to be close, Johnson converted his hip pocket into ballot box 13 (see below). He stole the primary victory from Stevenson, which eventually led to his securing the Senate seat that would propel him to the White house.

The primary race was tight, with Stevenson first being declared the winner on September 3rd by a lead of only 262 votes of the nearly one million that were cast. Johnson was prepared. According to a study on the 1948 election written by Jason Matteson and published by Eastern Illinois University, the very prepared Johnson campaign team had been extensively planning to produce whatever number of votes would be needed to win a tight race. He writes:

“After the ‘official’ results were announced on Thursday, the real conspiracy began. Early on Friday, September 3, election officials in a little southern Mexican-American town, dominated by George Parr, announced that the returns they released earlier in the week were incorrect. Officials in Alice, said they found an additional 203 ballots in their ‘Box 13.’ Of these 203 ballots, 202 were for Johnson, leaving only one for Stevenson! Officials from another Parr-dominated county Duval-also announced that they had some ballots that were not included in their tally from earlier in the week. After these votes had been counted, LBJ had 87 more votes than Stevenson with a final tally of 494,191 to 494,104.”

According to Matteson, the deciding vote in the 29-28 tally was “placed by Charley Gibson, a drunk committee member rushed in at the last minute by Johnson supporters.” After the election, Stevenson filed a protest that was denied by the state Democrat Election Committee. Stevenson then turned to the courts for relief, but was ultimately shut down by the partisan Democrat hack SCOTUS Justice Hugo Black. Johnson was cleared to be the party nominee for the November general election.

Johnson won that election, and the rest is very dark American history. Once he became President after the death of JFK, he went on to give us the Great Society programs that made clean the break from American self-reliance—a break initiated by Roosevelt’s New Deal. Johnson also gave us the Vietnam War, which would forever change America’s view of how and when to use military force.

Years later, Johnson would all but admit his cheating his way to office in 1948, an incident that was also confirmed by a key participant. For any member of the mainstream media or the Democrat Party, that denies the election of election tampering, they are ignoring their own history and the confirmed actions of one of their Constitution-hating role models.

JOE BIDEN NEEDS TO KNOW THIS ISN’T GOING AWAY

Every single American, even the ones who enthusiastically support Joe Biden, know that the Democrats cheated in this year’s election. Everyone. As my friend Senator Rand Paul pointed out on Twitter, the statistical anomalies we have seen—especially in the swing states—cannot be explained rationally by any other causative event other than fraud. (I’m paraphrasing. The Senator was not quite so blunt but I’m happy to be.)

In 2020, the Democrats went to the playbook that Lyndon Johnson sketched out in 1948. While the complexities of voting today are far more sophisticated than it was seventy years ago, the tactic is fundamentally the same. The Democrats had a whole host of “ballot box 13’s” all over the country. From Michigan to Arizona, from Stacy Abrams’ Georgia to Pennsylvania, just enough votes managed to appear to give Joe Biden—a man who could not carry as many key areas as did Hillary Clinton in 2016—an apparent resounding electoral victory.

Biden supporters know he cheated. We know he cheated. Just like Lance Armstrong and Lyndon Johnson, Biden supporters know his victory is fake news. While it is yet to be seen if he will be stripped of his “title” before January (unlikely), history is going to catch up with him. His presidency, whatever it might bring, will be judged as illegitimate and fraudulent. Fraudulent like Armstrong’s seven straight Tour de France wins, and Johnson’s 1948 Primary win. Let us hope that an election built on cheating and lies, like any other relationship, cannot ultimately stand.