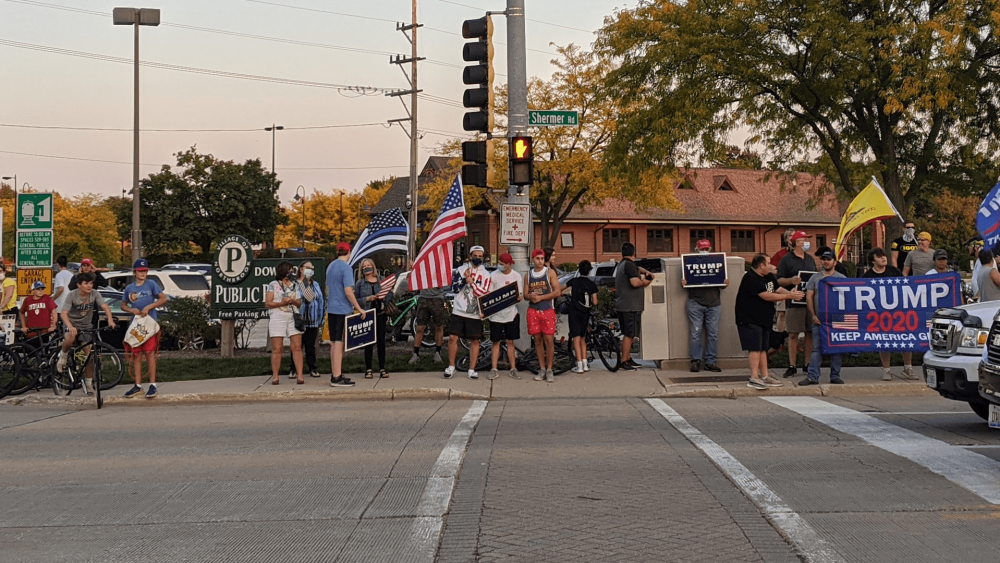 A small local protest in the North Shore Chicago suburb of Northbrook drew international attention over the weekend, as a seventeen-year-old high school junior teamed with local Republicans to organize a Friday evening rally in support of President Donald Trump—and against one organization’s attempt to use public signage as a way to blame the President for COVID-19 fatalities.

Glenbrook North High School (GBN) student Peter Christos said he organized the rally because he was “sick of seeing the socialists lies that have destroyed communities and families all across the country.”  An unapologetic supporter of President Trump since the beginning, Christos says that the final straw that pushed him to lead this rally was the posting of a sign in downtown Northbrook by an organization called Peaceful Communities.  The prominent, eye-level, billboard-styled, sign is manually updated to keep a running tally of COVID-19 deaths with “Donald J. Trump, President” printed along the bottom.

Friday’s protest drew in a wide range of supporters of the President, from adult residents to high school students, who gathered on the east side of Shermer Road, Northbrook’s main downtown street. A counter-protest featuring supporters of Joe Biden gathered on the west.  The demonstrations were peaceful, but not without vitriol. One Biden supporter was heard to say to the mother of a Trump-supporting student, “you should have aborted your son.” Signs, megaphones, and t-shirts with political messaging were common.

Christos was surprised by the turnout, which grew steadily over time after 5:00 p.m., when the event was scheduled to start. “I don’t hide myself,” the junior organizer said. “A lot of people were afraid to come out today for fear of being doxed, losing their jobs, getting kicked off sports teams, whatever. This turnout is great.”

The sign at issue was approved by the Northbrook Village Board, despite the objections of some residents claiming it was purely politically motivated. The organization, Peaceful Communities, and its founder retired attorney Lee Goodman, have a history of protesting traditional American ideas and values, and are staunch opponents of President Trump’s “pro-America” agenda.  A visit to the organization’s website is revealing: the group hopes to repeal the Second Amendment and release people into the general population who are being held for attempting to enter the country illegally.

At the time the sign was unveiled, Goodman was quoted as saying, “This display is a reminder of the continuing need to take precautions. Schools and businesses are reopening, but the disease is still spreading, and people are still dying." While that statement appears non-partisan at first, the strategic inclusion of the President’ Trump’s name was a clear act of partisanship, and has been interpreted that way by Northbrook community members.

While the sign was the “trigger” for Christos to organize the rally, it was not the only precipitating event. He also expressed frustration over the politics inside of his high school, a common theme since the election of President Trump back in 2016.

“I’ve had my MAGA hat stolen twice,” Christos said. “The dean’s office refused to do anything about it and said that hats like mine were not welcome in the GBN community.” When asked what was unwelcome by the school, Christos replied, “they said they do not allow political things to be worn, but students wear other sorts of political shirts all the time.” The implication to Christos is that the school only cares to enforce the policy with regard to pro-Trump apparel items.

A phone call to Glenbrook North High School regarding its policies was not returned. A review of the current student handbook did not reveal any obvious mention of political clothing items being prohibited; only the following four criteria are listed:

It is not in violation of any statute. 2. It does not constitute a threat to the safety or health of self or others. 3. It does not reference alcohol, drugs, tobacco, or violence. 4. It is not offensive by the wording or design, or suggestive of a double meaning. 5. It is not gang related in any form or manner

Christos also indicated he has experienced discrimination within classrooms from teachers pushing an ideological political agenda hostile to the President. “The teachers at GBN engage in anti-Trump rhetoric,” Christos said. He also expressed his opinion that the political bias from teachers is reflected in assigned essay topics and the grades issued according to the student’s willingness to adhere to progressive orthodoxy.

When asked what he wants to do after high school, the “America-first” young warrior gets enthusiastic. “I want a job with Turning Point USA! I follow them, Candace Owens, and Charlie Kirk on Instagram. I want a job teaching young people that it's ok to believe in America and President Trump and that they don’t have to be afraid.”